Ever throw a party and wonder if anyone will come? How about throwing an anniversary party and knowing people can’t come?

Richard Hartogs, and the rest of the team at Rocket Frog Brewing Company find themselves celebrating their second year of brewing virtually, hosting a Zoom Happy Hour last night. Rocket Frog came out of the gate strong their first year with a Great American Beer Festival Bronze for their Wallops Island Brown Ale.

For many new breweries, that first year can all blur together. In their sophomore season, there are at least reference points to look back on. Per Richard, “it felt like we were finally in a good groove — probably our best as a working production brewery–in February.” And then all those lessons learned had to be shelved for one guiding idea: adapt. 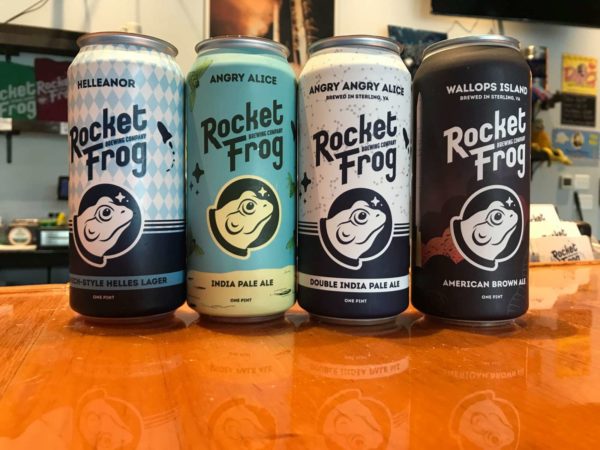 Rocket Frog closed their taproom ahead of Gov. Northam’s executive order and were early adopters of “Biermi,” a beer pick-up and delivery app developed by DMV-area brewery, True Respite. I can say from personal experience their pick-up operation is one of the smoothest and safest of any brewery I have ordered beer from in the last two months. Hand sanitizer is available for guests, staff members are in gloves and masks, and orders can be picked up from tables or brought outside for contactless curbside pick-up with a quick phone call.

Closing the taproom may have been a quick decision, but it certainly wasn’t easy. “We had to lay off some brewery staff. That was hard on Russell (Carpenter, PhD, Head Brewer), but we’ve recently brought them back in for some hours and hope to have him back soon.”

Next challenge: anniversary plans. Richard is no stranger to virtual or in-person beer meetups, having run Beer Head on meetup.com and being a regular contributor to the YouTube beer show Better Beer Authority. Last night, co-hosting with CJ Cross of Hops N Shine in Del Ray, Rocket Frog had their anniversary via Zoom.

Was it as good as an in person event? No. Adaptation is like that. We do what we can while we can. Maybe we find ways, bit by bit, to improve, to move from surviving to thriving. Right now at Arrowine we seem to adapt to something new each day. Until we can see you all again, we’ll be here operating as safely as possible, providing you the assortment of beers, wines, cheeses, and more that help bring some comfort into your home.