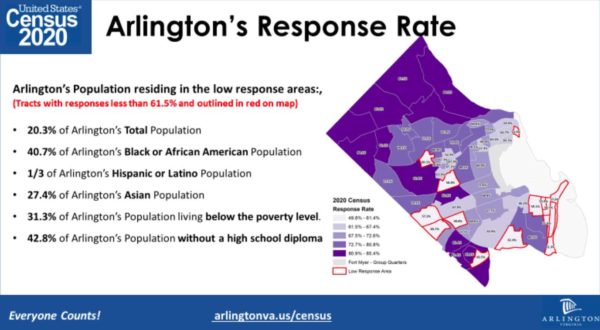 As Arlington County continues to push locals to respond to the census, the County has highlighted areas where significant portions of the local population remain uncounted.

A map published by the County last week showed low census response — less than 61.5% responding — from the western end of Columbia Pike and throughout Crystal City.

The County also noted that areas with low census response also represent 31.3 percent of Arlingtonians living below the poverty level.

“I know I’m not the only one to observe this, but clearly the folks that we’re needing to support for food and the folks that are going to need help getting COVID testing, it’s pretty much the same population,” County Board Chair Libby Garvey said in a meeting on May 19. “I believe we’ve been doing some outreach for the census in terms of food distribution. It could be that as we get more into this pandemic… that will really boost the effort on the census as well.”

Arlington County has a vested interest in trying to see as many Arlingtonians fill out their census forms as possible, with census data being used to allocate funding and resources to localities, as well as being used to determine congressional representation.

“We encourage everyone who has not taken the Census to take 10 minutes and take it today,” the County said in a press release. “And if you have already taken it, please help us spread the word and encourage friends, relatives and other people in your network to take the Census. Everyone counts!”