(Updated at 1:40 p.m.) Arlington and other Northern Virginia localities say they’re ready to reopen by the end of the week.

That’s according to a letter signed by Arlington County Board Chair Libby Garvey and other elected officials, sent to Gov. Ralph Northam and posted by Alexandria Mayor Justin Wilson on Monday evening.

“We have enclosed the updated May 24th assessment by the five [Northern Virginia] public health directors,” the letter says. “They have noted the regional attainment of four of the critical metrics and assessed the need for continued focus on expanding our contact tracing capability and developing sustainable supplies of PPE.”

The letter says the region is prepared for a Phase 1 reopening on Friday.

“Each of our jurisdictions have been making preparations to support a transition into Phase 1 at midnight on May 28,” the letter says, adding that “we would like the Northern Virginia region to move to Phase 2 in concert with the rest of the Commonwealth when that date is established.”

The @GovernorVA is expected tomorrow to announce the timing for our region’s entrance into Phase 1 of reopening.

Together with my counterparts, we have again provided input reflecting the consensus advice of our public health directors.

Making progress, but work ahead. pic.twitter.com/ogiuC8LMnF

Hospitalizations and positive coronavirus tests have been trending down over the past two weeks, the letter says, while testing is increasing and hospitals have sufficient spare capacity.

The backdrop of the letter, in Arlington, is a surge in testing that has pushed the average tests per day over the past 7 days to over 200, as well as a hospitalization rate — 36 hospitalizations over the past week — that is well below the peak of 92. The test positivity rate, meanwhile, has fallen below 20%. 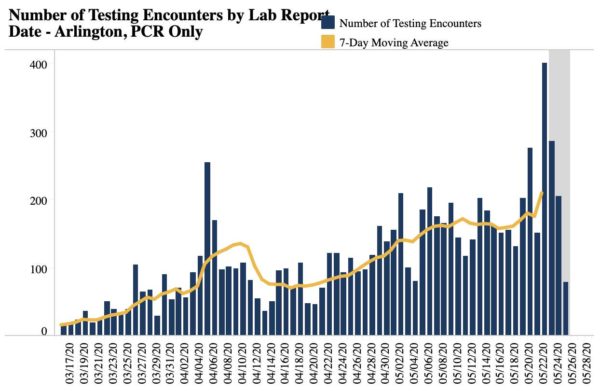 The increase in testing is due for another bump, thanks to a free COVID-19 testing event at the Barcroft Fitness and Recreation Center on S. Four Mile Run Drive today.

As of 9:45 a.m., testing had started early and was slated to run through 6 p.m. Police are assisting with traffic control, with cars lining up for blocks around the facility. The testing does not require a doctor’s order or an appointment.

“This is a state-sponsored event and is similar to other large-scale testing events in Northern Virginia,” Dr. Reuben Varghese, Arlington Public Health Director, told ARLnow over the weekend. “This site will be a one-day event with drive-through and walkup testing. We expect to test 1,000 people.”

As of 1:35 p.m., the site had reached capacity and was no longer accepting new patients.

Find a COVID-19 Testing Site near you with @VDHgov's map: https://t.co/MDXIzBKP8N

Increasing testing is a priority after several weeks of the testing rate seeming to have plateaued in Arlington.

“As private health care providers ramp up to offer testing, the state is also making opportunities available to ensure testing is offered for those who seek it,” Varghese said, also noting that the county’s drive-through and walk-up testing sites remain open. 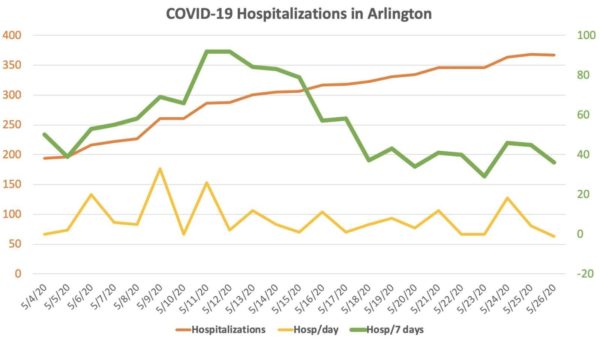 With the increased testing and decreased hospitalizations locally comes optimism today on the medical front. The stock market is up Tuesday morning thanks to word from several pharmaceutical companies that their coronavirus vaccine development is advancing, with positive early data.

On the less optimistic side, cases in Arlington County continue to increase. While the rate of increase is below the peak of three weeks ago, there are still around 300 new cases reported every seven days.

And a grim milestone was reached over the Memorial Day weekend: the number of COVID-related deaths in the county has passed 100. As of Tuesday morning, the latest data from the Virginia Dept. of Health shows 1,935 cases, 367 cumulative hospitalizations and 104 deaths in Arlington. 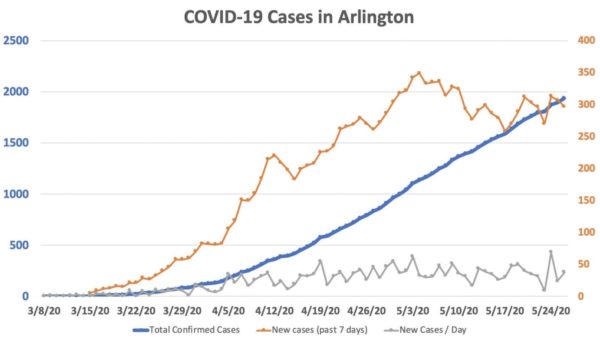