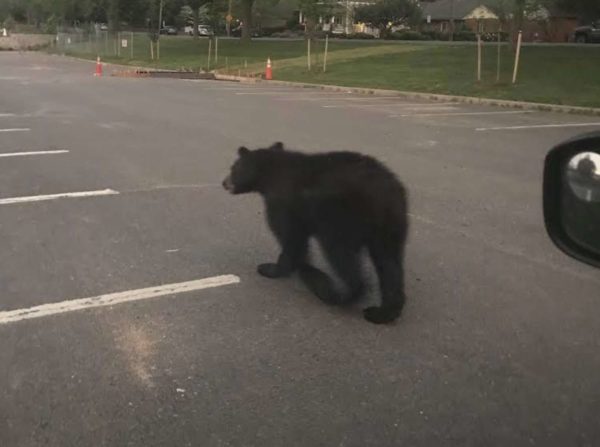 (Updated at 4:15 p.m.) A bear was spotted near Bishop O’Connell High School this morning.

The bear was spotted in the private high school’s parking lot by a construction crew, around 6:30 a.m., as seen in the photo above. It was later spotted around 7 a.m. closer to I-66.

“All the neighbors in the area saw it,” one poster said. “The workers saw it too.”

The Animal Welfare League of Arlington confirmed to ARLnow that its animal control unit responded to the area but was unable to locate the bear.

“The bear appeared to be a yearling male… Animal Control quickly responded and monitored the area but was unable to locate the bear and there was no property damage,” the statement continued. “The bear did not approach any people, pets, or residences and quickly left the area. If a resident ever sees a bear we ask that they keep a large distance and immediately report to Animal Control at 703-931-9241. Animal Control is continuing to monitor the area to ensure the bear has moved on.” 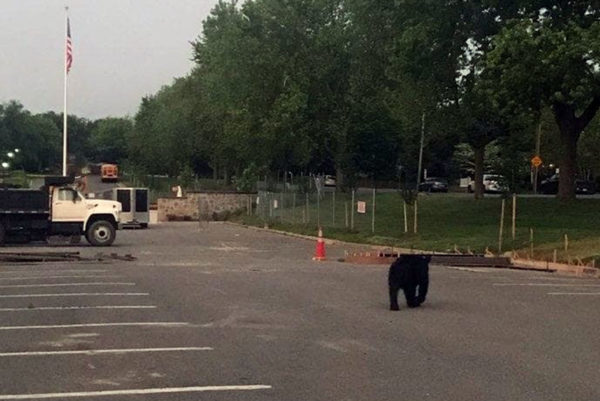 Bears, especially young males, travel away from their families and often, as they don’t know as much as older bears, into new areas that perhaps are not ideal for them. They are shy and almost always try to get away from people, would like for you to leave them alone as well. Eventually they either find their way back to more wild settings or are helped to get there. They are almost always not a danger and just would like to be left alone. If you find one, just calmly report it. If you know they’re around you, don’t leave trash cans, pet food, and bird feeders around that may attract them. This is not an uncommon occurrence as bear numbers have really built up. For example, there are 4 bears this calendar year that have been seen in Fairfax.

A bear was spotted in the Reston area two weeks ago, our sister site Reston Now reported.

“It’s not uncommon to spot bears this time of year as they wander into residential areas in search of food,” Reston Now wrote. “County officials say that bears may be drawn into populated areas because of the smell of food. Other things that attract bears include garbage, compost piles, fruit trees, beehives and berry-producing shrubs.”