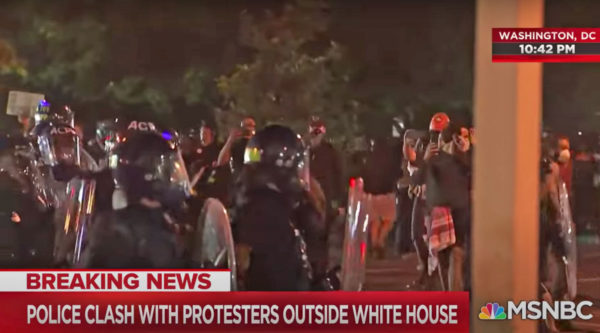 Earlier: If you were watching cable news coverage of the fiery clashes near the White House last night, you might have spotted “ACPD” on the helmets of some of the riot police.

Your eyes did not deceive you. On Sunday, Arlington County Police began assisting with the law enforcement response to the protests, which have been mostly peaceful during the day but have turned destructive after dark for three straight nights.

Park Police have been attempting to defend Lafayette Square, north of the White House, amid mass, nationwide protests that have followed the death of George Floyd at the hands of since-fired Minneapolis police officers, one of whom is now facing a murder charge.

Update: Some officers from the new column of reinforcements are wearing helmets with “ACPD” on them — looks to be Arlington Country Police from across the river. Most from the new group of LEOs are holding at the corner of the park. #dcprotest

It appears that Arlington officers are back on the streets of D.C. today, as the District imposes a 7 p.m. curfew in an effort to prevent more destruction and violence. Earlier today tipster noticed a convoy of Arlington public safety personnel departing from Courthouse, where ACPD headquarters is located.

“Arlington police dressed in riot gear just loaded into vans and are leaving the Courthouse area with a fire department bus and an armored car under police motorcycle escort,” the tipster said.