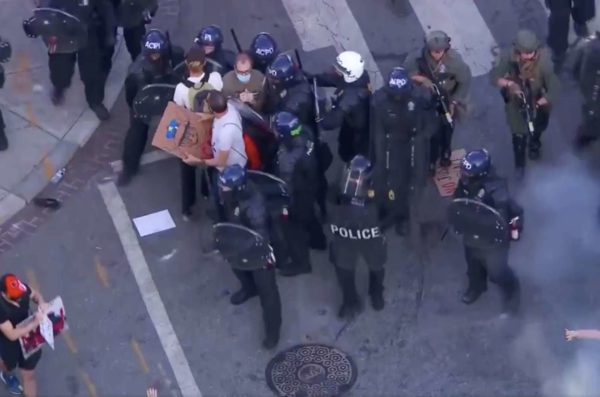 Officers in ACPD helmets could be seen in photos and video (below) assisting with the forceful removal of protesters from around St. John’s Church, an action that involved the deployment of tear gas. Shortly thereafter, President Trump walked to the church and held up a bible, a move dismissed as a photo opportunity by critics and criticized as “antithetical to the teachings of Jesus” by the Episcopal bishop of Washington.

“Appalled mutual aid agreement abused to endanger their and others safety for a photo op,” Garvey wrote just before 9 p.m., about two hours after the incident. “We ordered @ArlingtonVaPD to immediately leave DC.”

“At the direction of the County Board, County Manager and Police Chief, all ACPD officers left the District of Columbia at 8:30 tonight,” the county subsequently said in a brief statement. “The County is re-evaluating the agreements that allowed our officers to be put in a compromising position that endangered their health and safety, and that of the people around them, for a purpose not worthy of our mutual aid obligations.”

County police in riot gear were assisting with crowd control in Lafayette Square, near the White House, following a mutual aid request from Park Police. Such requests are typically used for suspect searches or to assist with significant incidents; Arlington often requests the assistance of the U.S. Park Police helicopter, for instance.

Following inquiries from ARLnow, after we noticed ACPD helmets in a TV news broadcast Sunday night, a police spokeswoman earlier today confirmed that Arlington police were indeed in D.C. after a mutual aid request.

The department has worked to maintain a positive relationship with the community over the years, including by handing out water to protesters in Arlington on Sunday. On Friday, amid nationwide protests over the death of George Floyd, police chief M. Jay Farr released a statement.

“It is impossible for us to achieve our mission if we lose the trust of our community,” he wrote. “When force is used, we must hold ourselves accountable for our actions.”

“We work and live by a set of core values: courage, competence, commitment, compassion, restraint, respect and integrity,” the department says in its job description for new officers.

“The Arlington County Board condemns the murder of George Floyd by police officers in Minneapolis, including the complicit officers who participated in and witnessed the murder,” the statement reads. “While the video was shocking, the circumstances of the murder should not be; they are too familiar in a nation where the disregard for and devaluing of Black lives is too common, and too often comes at the hands of the people sworn to protect them.”

Bishop Mariann Edgar Budde: "The President just used a Bible … and one of the churches of my diocese without permission as a backdrop for a message antithetical to the teachings of Jesus and everything our churches stand for….I am outraged." pic.twitter.com/yegcO7xoJ0

Alexandria Police were not in DC today.