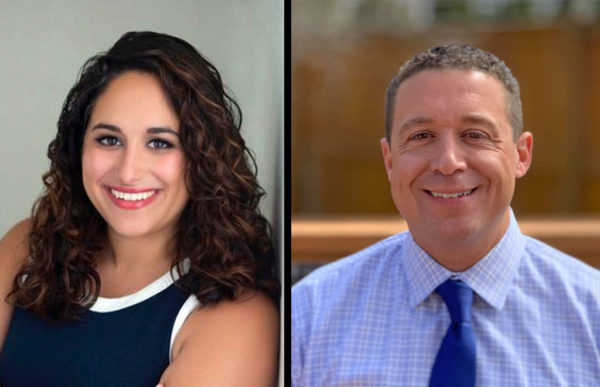 In a race upended by the coronavirus pandemic, Cristina Diaz-Torres and David Priddy have emerged on top of a five-candidate field for the Democratic school board endorsement.

Diaz-Torres and Priddy will now advance to the general election, as they seek to fill the two Arlington School Board seats being vacated by Nancy Van Dorn and Tannia Talento. In November they are expected to face Symone Walker, who dropped out of contention for the Democratic endorsement and is instead running as an independent.

(School Board races are officially nonpartisan and parties can only endorse candidates, not nominate them as in a primary.)

Due to the pandemic, the Arlington County Democratic Committee conducted voting by mail, which was deemed “the only safe and reliable option for a large-scale caucus.” Steven Krieger, a candidate in the race who placed a close third, last month publicly criticized the format as inequitable.

“This process presented significant equity challenges to disadvantaged citizens including the poor, English language learning voters as well as voters with disabilities,” he wrote in an op-ed published by Blue Virginia. “The vote-by-mail election for the School Board caucus should serve as a clear reminder that if we fail, even for a moment, to be intentional in fighting inequities in our community, the most vulnerable members of our community will bear the consequences.”

Arlington Democrats, however, said the two-month process was the only one that would allow safe voting in a timely manner.

“This was the first all-mail School Board Endorsement Caucus in the history of the Arlington Democrats, and I am proud to say that our team and the community stepped up to make it a success,” ACDC Chair Jill Caiazzo wrote in an email to members tonight. “More than 5,700 ballots were cast, far exceeding the 1,994 ballots cast in the 2019 in-person School Board Caucus.”

In a press release, the party congratulated the two endorsees.

“The Arlington School Board’s thoughtful stewardship of our schools is a big part of what makes Arlington such an attractive place for both families and businesses,” Arlington Democrats School Board Endorsement Caucus Director Jacki Wilson said. “We congratulate Cristina and David, and thank all five candidates who stepped up to serve their community and sought our endorsement.”

More on the endorsees, from the press release:

Cristina Diaz-Torres is an education policy specialist who began her career as a part-time preschool teacher at a Head Start program, and then worked as a high school math teacher in Las Vegas, where she taught geometry and founded an AP statistics program. After leaving the classroom, Diaz-Torres served as a legislative fellow for Sen. Sheldon Whitehouse, where she worked on implementation of the Every Student Succeeds Act, the 2015 federal law that replaced the No Child Left Behind Act governing U.S. K-12 public education policy.