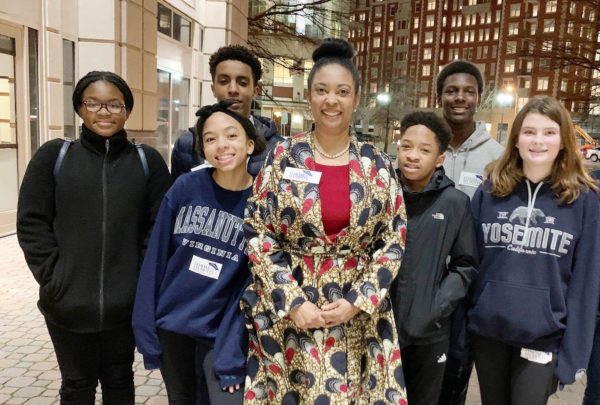 Local education activist Symone Walker is no longer seeking the Democratic endorsement in her campaign for School Board, instead opting to run purely as an independent in the fall.

In Virginia, all School Board races are nonpartisan, but parties can still endorse candidates. In a statement, Walker said she is no longer seeking the Arlington County Democratic Committee’s endorsement.

Walker “will not participate in the Arlington County Democratic Committee’s (ACDC) school board caucus for the party’s nomination, citing the committee’s inability to effectively address ongoing harassment her campaign received from an opponent in the race and instead will continue as an independent candidate for one of two seats on Arlington’s school board,” the statement said.

“Walker started her campaign in January after having received a favorable ethics opinion from her federal agency employer finding her candidacy compliant with the Hatch Act and citing a federal statute that allows her to run for the school board,” the statement continued. “Despite this, an opponent has continued harassing her by filing and purposefully escalating a series of complaints with a clear goal to reverse these initial, favorable determinations and derail her candidacy.

“After the political harassment against Walker succeeded in characterizing the ACDC caucus process as partisan enough to be not compliant with the intent of the law, ACDC needs to reconsider that the process now unfairly disenfranchises the approximately 37,000 federal employees living in Arlington, who comprise one-third of the electorate, many of whom are well qualified for the school board,” the campaign added.

It was not immediately clear which of the five other candidates challenged Walker’s candidacy by citing the Hatch Act, which “prohibits employees in the executive branch of the federal government… from engaging in some forms of political activity.”

Arlington Democrats said that the committee has “no standing to intervene in her employing agency’s decision-making about the nature of those restrictions and has no authority to countermand the agency decision.”

“Arlington Democrats appreciate Ms. Walker’s cautious approach to complying with the Hatch Act legal restrictions applicable to her as a Federal employee,” ACDC Chair Jill Caiazzo said via email. “Like other organizations that endorse candidates in school board races, such as education associations and teacher unions, Arlington Democrats believe that its endorsement is one of many valuable data points about these races for voters.”

“With respect to the harassment concerns associated with the raising of this legal compliance matter by another campaign, Arlington Democrats leadership spoke separately to both candidates in an effort to address the concerns, as well as offered the opportunity for Ms. Walker to speak directly to the Arlington Democrats Steering Committee to determine whether action by the organization could or should be taken about her concerns,” Caiazzo added. “We look forward to the continued exchange of ideas in this year’s school board race, as we work toward our shared goal of a strong school system that empowers all students, teachers, and staff. ”

The other School Board candidates who have announced their intention to seek the Democratic endorsement include Cristina Diaz-Torres, David Priddy, Sandy Munnell, Steven Krieger and Terron Sims. The deadline to file as a candidate is today.

Walker, a Jamaican immigrant who has lived in Arlington for more than 20 years, has advocated on various school and community issues. Recently, she has been quoted making the case for shorter summer breaks for students, revamped literacy testing, and better vetting of Arlington Public Schools’ new diversity chief.