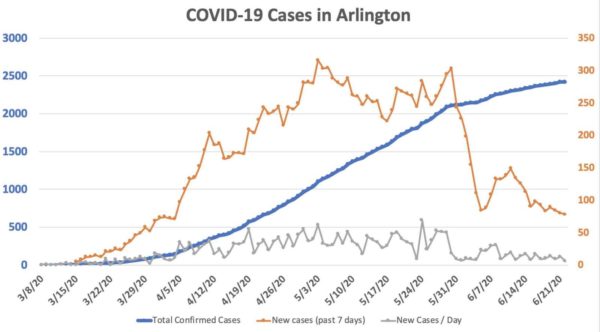 (Updated at 10:30 a.m.) The rates of new coronavirus cases and hospitalizations in Arlington have hit new lows, though expanding outbreaks elsewhere in the country raise questions about how long the declines will last.

Only 28 new COVID-19 cases have been reported since Friday, according to Virginia Dept. of Health data. The trailing seven-day total of new cases is now 78, the lowest mark since April 4.

No new coronavirus deaths were reported over the weekend.

As of Monday morning, VDH listed a cumulative total of 2,424 cases, 412 hospitalizations and 126 deaths in Arlington. The county’s coronavirus test positivity rate is now just 5.3%, another new low.

The declining outbreak has been noticeable in the emergency room, according to a public Facebook post from Virginia Hospital Center ER chief Mike Silverman.

“This was a good week for our ED,” Silverman wrote. “Our COVID isolation patient volume (the way we track patients in the computer) did not increase compared to last week. Our admission rate was actually lower than it’s been in months for this patient group and our percent positive rate is dropping.”

Silverman, however, noticed a new trend: many of those enjoying the newfound freedom of going out to bars and restaurants are partying hard.

“In many ways, it resembled a typical summer weekend,” Silverman wrote about the first weekend of Virginia’s Phase 2 reopening, which started on Friday, June 12. “We had traumas, lots of alcohol related illness, and psychiatric patients. What was unusual from the alcohol perspective was the number of highly intoxicated people who were brought directly from bars. People partied hard. What was equally concerning were the reports we were getting from medics about bars being packed shoulder to shoulder with people and no one wearing masks.”

A Twitter user noted one such scene in Clarendon this weekend.

Among the states with expanding outbreaks, a common thread is that the upward momentum seems to have started with reopening. And the new cases are skewing younger, suggesting that bars and social gatherings may be playing a role.

So far, the data here has continued trending positive and Arlington — as well as Northern Virginia as a whole — has not seen the reopening uptick other states and localities have experienced. Virginia Gov. Ralph Northam, meanwhile, is still holding off on moving the reopening to Phase 3, which some experts fear could be the catalyst that pushes cases and hospitalizations back up.