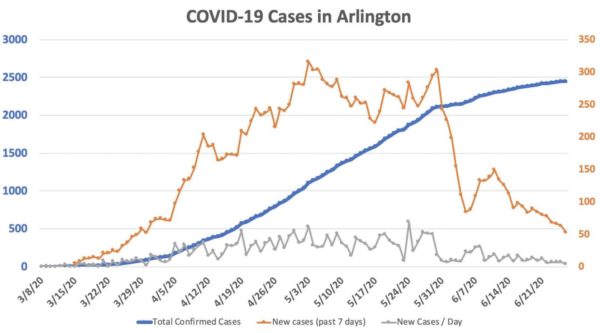 (Updated at 11:10 a.m.) Despite a mass-testing event a week ago, that saw nearly 1,000 people tested in one day, only 53 new COVID-19 cases have been reported in Arlington over the past seven days.

That’s the lowest seven-day total since March 28, when only 75 cases had thus far been confirmed in the county as the outbreak got underway and testing was scarce.

Five additional deaths were added to the count overnight, the largest daily increase since late May. Only one additional COVID-related death had been reported over the past week. Local officials say today’s increase is mostly due to a review of past data by the state health department.

“The reported jump is a result of a periodic review by VDH of the death certificate data it receives,” explained Arlington Public Health Division spokeswoman Cara O’Donnell. “[It] reflects four cases from April and May. As VDH conducts these periodic reviews we expect to receive reports of additional deaths in conjunction with when these reviews take place.”

Arlington’s test positivity rate, meanwhile, has continue to fall with the mass testing event factored in. For lab-based PCR tests, the positivity rate currently stands at 3.6%.

Arlington and the rest of Virginia is set to enter Phase 3 of the reopening on Wednesday. Texas and Florida, meanwhile, have paused their reopening amid and “explosion” of cases there and across the South. 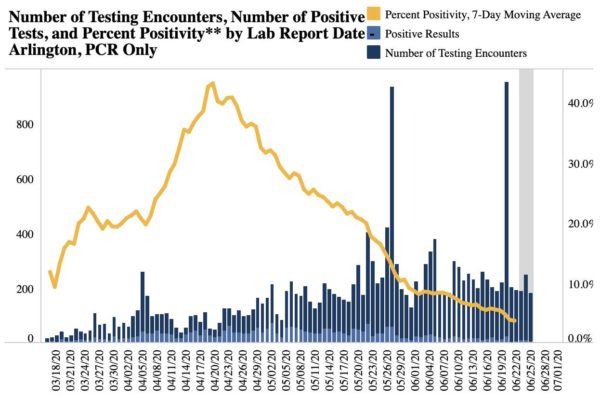