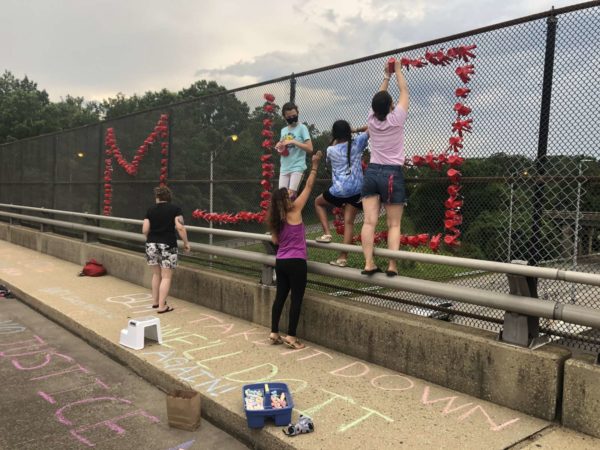 (Updated at 11:45 p.m.) More than 500 people have signed a petition calling for the S. Abingdon Street bridge over I-395 to be renamed “Black Lives Matter Bridge.”

The petition was created amid dueling efforts to place and remove the letters “BLM” on the bridge’s chain link fence, a thus far nonviolent dispute that has resulted in multiple calls to Arlington County police.

The BLM art first appeared about a month ago, during nationwide protests over the deaths of Black men and women at the hands of law enforcement.

Two weeks ago, the red cups used to form the letters were removed, promping locals to replace them with new cups and to write new chalk slogans. Among them: “no justice, no peace” and “take it down and we’ll do it again.”

Melissa Schwaber, who sent photos of the cups being replaced, described those doing so as “Fairlington moms and their kids.”

The cups were later removed again, which led to Black Lives Matters supporters creating a heart and spelling out BLM with harder-to-remove ribbons. That won Twitter praise from Arlington County Board Chair and Fairlington resident Libby Garvey. The next day, however, someone spray-painted “TRUMP 2020” under the letters.

@libbygarvey this is what they woke up to this morning. @ARLnowDOTcom pic.twitter.com/t9NsrlfzpB

The spray paint was in turn sprayed over later that morning, and “BLACK LIVES MATTER” written in chalk over it. Then, more spray paint appeared.

In a series of tweets on Wednesday, July 1, a local resident posted photos of an older man and a younger man — wearing a motorcycle helmet and a Liberty University shirt — who she accused of vandalizing the bridge and the lettering. 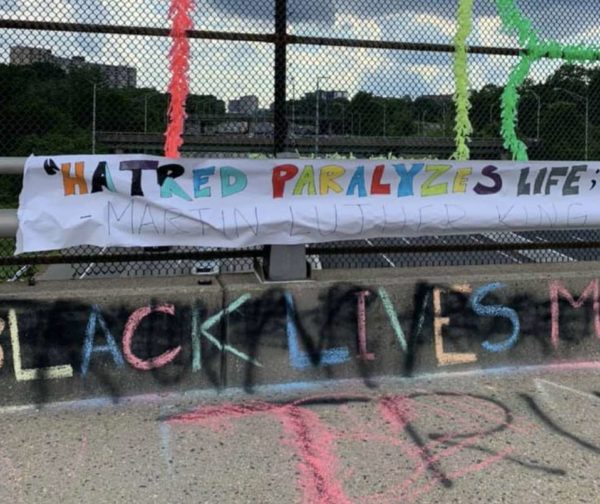 On Friday, a tipster said the “BLM vs. MAGA battle” was continuing to escalate.

“Now there are people putting up conspiracy theory banners on the bridge and people camped out on the bridge with large dogs,” the tipster said. The banners included a photo of Hillary Clinton under the words “WANTED 4 Crimes Against Humanity.”

Later that day, there were more skirmishes.

“I was driving on the Fairlington Bridge an hour or so ago and saw a man arguing with several white women near the BLM signs,” said another tipster. “He was waving his arms in one woman’s face. About 15 minutes ago, on my way home, I saw that the Arlington PD (about 3 cars) had detained the man at the gas station in Shirlington.”

An Arlington County police spokeswoman tells ARLnow that officers have responded to the bridge several times.

“ACPD has responded to multiple reports of disputes in the area of the S. Abingdon Street bridge regarding the posting and removal of signage,” said Kirby Clark. She said that “no charges have been filed related to any incidents involving the signs,” but one incident is under investigation.

“At approximately 8:16 p.m. on July 1, police were dispatched to the report of vandalism,” Clark continued. “Upon arrival, it was determined that the victim observed the male suspect removing ribbons from bridge fencing and placing them in his backpack. The victim approached the suspect, who then allegedly threatened them and fled the area on a motorcycle prior to police arrival. The investigation is ongoing.”

“The Department has since responded to approximately three additional reports of disputes involving signage posted in the area,” Clark added. “Extra checks were conducted in the area throughout the weekend.”

The neighborhood civic association said Friday that it was aware of “the recent acts of vandalism” and working with the police department.

“ACPD cautions the public not to engage with someone you think is committing vandalism or defacing property,” the Fairlington Citizens Association wrote. “Instead, you can call the police [at 703-558-2222] or file an online report.”

The petition, which seeks to have the bridge renamed, asserts that those defacing the Black Lives Matter messages are mostly not from Fairlington.

“While the vast majority of the community supports these efforts, there are some — mostly from outside the neighborhood — who continue to tear down the installations, and have even vandalized the bridge with spray paint on multiple occasions,” the petition says. “The community continues to meet to restore their work time after time, and have even cleaned the graffiti from the sidewalks and walls themselves.”

Despite her words of encouragement for those putting up the BLM letter, Garvey acknowledged Monday evening the messages on the bridge are against county code “and will have to be removed in the normal course based on other workload demands.”

The battle of over the bridge is a microcosm of the ideological battle playing out across the country, she suggested.

“I learned long ago that Arlington is diverse in many ways, including diverse in the opinions people hold,” Garvey wrote. “At the moment, we are reflecting the divisions in our nation and, I believe, the battle for the soul of our nation.”

“I think it is clear to many people that Americans need to speak out themselves for what our nation stands for,” she added. “Most people feel the incendiary and vile language coming from the current occupant of the White House and those who support him, needs clear and loud opposition to show that most Americans genuinely want to move forward and address the issues of systematic racism that have plagued our country from the beginning.”

There have been several other incidents of racially-motivated acts of vandalism in Arlington since the start of Black Lives Matter protests in late May, including the defacement of two signs in front of local churches, and — last week — the posting of KKK stickers on stop signs in the neighborhood near Yorktown High School.