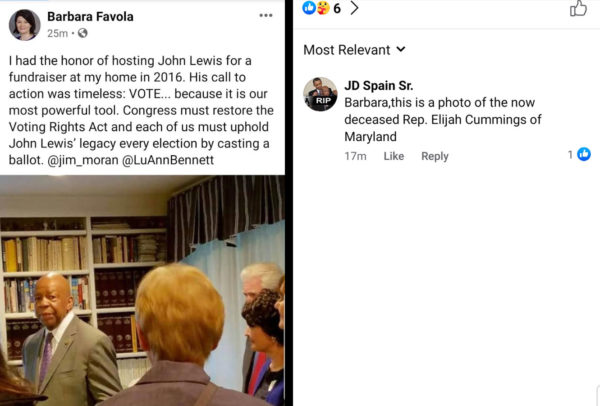 Sens. Marco Rubio (R-FL) and Dan Sullivan (R-AK) are not the only ones to have mistakenly posted photos of the late Elijah Cummings while trying to honor John Lewis, who died on Friday.

Local state Sen. Barbara Favola (D) posted a photo on Facebook over the weekend that she said was Lewis, the civil rights leader and Georgia congressman, at her house four years ago.

“I had the honor of hosting John Lewis for a fundraiser at my home in 2016,” wrote Favola, who represents a portion of Arlington in the state Senate. “Congress must restore the Voting Rights Act and each of us must uphold John Lewis’ legacy each and every election by casting a ballot.”

The problem: the photo actually showed Cummings, the former Maryland congressman who died in October.

The mistake was pointed out in a comment by Julius Spain, Sr., the head of the Arlington chapter of the NAACP. The post was subsequently taken down.

Spain said he spoke to Favola about the error Saturday night.

“She apologized stating it was a mistake,” he told ARLnow.