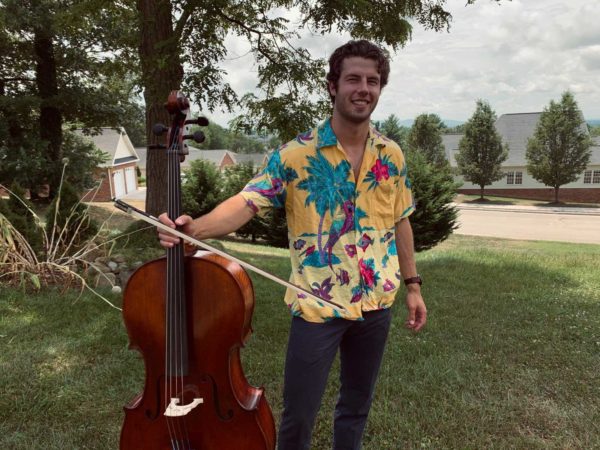 A local cellist recently went viral on TikTok for his classical covers of pop songs.

Savoia’s recent cello cover of the song “Come Get Her,” originally by hip-hop artist Rae Sremmurd, has more than 1.5 million views and counting. According to his profile, the page currently has roughly 92,000 followers and 646 “likes.”

In recent months, TikTok made headlines as a social media platform for politically active youth but the app is moreso used as a platform for comedy and entertainment.

In a post from July 12 (above), which featured a cover of “Supalonely,” viewers can spot the Washington Monument and portions of Arlington’s Rosslyn-Ballston corridor in the background. Savoia said he and his friend filmed it on the rooftop of his mom’s apartment building in Ballston.

Other filming locations include public open spaces around town and a bridge near Navy Yard in D.C.

“What I’ve been doing is choosing a song that I really want to play and picking a background that fits with that song,” he told ARLnow.

So far, four out of Savoia’s eight viral videos have been filmed in Arlington.

Other covers by Savoia include “Roses” by SAINt JHN, “Blinding Lights” by The Weeknd and other songs topping charts globally. Many of the hits that Savoia chooses to cover come from memes and other TikToks sent to him by friends, he said.

“Some of those tunes are really catchy and they get stuck in my head,” he said, adding that he’ll experiment with the song before deciding that he wants to post a video.

Boosting his popularity further, other TikTok users are now using his music to compose their own posts. Savoia said he loves to see fans interacting with his music because it encourages them to pick up an instrument and revive their passion for classical music.

On the app, TikTok offers a “duet” feature, which lets users record their own content side-by-side with another post — as if the two accounts were performing at the same time. Going forward, Savoia said that he would love to see more collaboration like this.

Inspiration for the project first came to him after he bought recording equipment to do a full-length, four-minute cover of a Weeknd song but didn’t like the final result — and instead decided to stick to a 30-second clip, which he and friends later posted on TikTok.

“The response was really positive and that just made me want to do it more,” Savoia said.

Savoia learned to play the cello at age nine. After graduating from Virginia Tech last year with an undergraduate degree in clinical neuroscience, he revived his love for music by joining the New River Valley Symphony. But since COVID-19 forced the cancelation of concerts and group practices, Savoia said he had extra time on his hands to pursue his musical passions in other ways, like the creation of a viral TikTok account.

“I had no expectations,” he said. “My goal was to put out something I had fun playing.”

For viewers wondering about the absence of sheet music, Savoia said he is able to extrapolate notes by ear — a skill he picked up while studying classical music theory.

Going forward, Savoia doesn’t have a set schedule for releasing fresh videos, but he hopes to keep uploading content as long as people are enjoying it.

Instead of actively promoting his account, Savoia said that all of his traction on the app was gained organically, only using the app’s algorithm and allowing people’s natural interest in music to drive traffic.

“Other people are having fun and that’s inspiring,” he said.