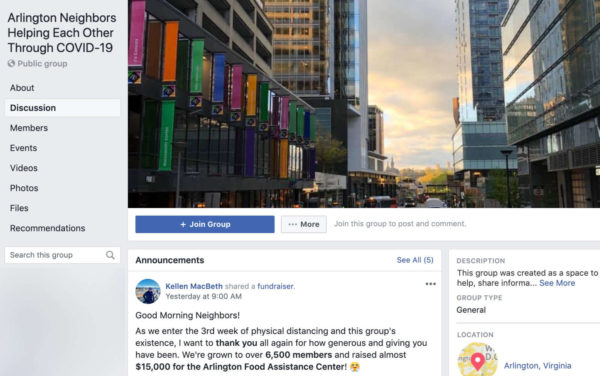 (Updated at 8:20 p.m.) The chairman of the Arlington GOP has been booted from the “Arlington Neighbors Helping Each Other Through COVID-19” Facebook group for threatening to expose those who file complaints about local businesses.

In a post on Sunday, one of the group’s moderators said that Andrew Loposser posted screenshots showing the names and contact information of people who filed complaints about COVID-related violations in Virginia. He also threatened to reveal information others who complain.

“We have removed and blocked the chairman of the Arlington County Republican Committee, Mr. Andrew Loposser, from Arlington Neighbors Helping Each Other Through COVID-19,” wrote moderator Joshua Farrar.

Threatening to dox and protest members of our community who report potential violations of our public health policies, developed and enacted in response to COVID-19, in the interest of public health, is entirely unacceptable. Comparisons of those who support public health restrictions on local business to Nazis are horrid and inappropriate, and diminish the experiences of Holocaust survivors, and are an affront to the memory of the millions of lives upended and extinguished, murdered, by Hitler and his machinery of extermination. We do not know how this individual was able to obtain complaint data and we do not know what other data this individual possesses. As such, we have reported this incident to local authorities.

Loposser appears to have also made a “Nazi” comparison in response to a post about Arlington’s new restrictions on sidewalk gatherings and queues.

Loposser tells ARLnow that he decided to write the post about those filing complaints to combat what he described as a culture of “hysteria” over the pandemic.

“I believe people who are fomenting hysteria across Virginia and in our community should be criticized for creating an unsafe environment surrounding coronavirus guidelines,” he said. “The ‘Arlington Neighbors’ Facebook group is… being driven by misinformed busybodies who are wreaking havoc on businesses they don’t like. I posted about those busybodies, and the partisan admins block people they don’t agree with.”

Though outdoor gatherings are believed to be safer than indoor gatherings during the pandemic, a number of recent posts on the Facebook group have focused on outdoor behavior perceived as risky.

“I was out walking in my neighborhood and a rude runner ran literally right up on me, close enough I felt him breathe on me on an exhale,” wrote one user. “Should I be worried about being breathed on? Ew. I’m obviously annoyed and shaken, especially since I was a bit startled.”

Comments about the encounter were split between those criticizing runners and cyclists who don’t wear masks and those who do not believe such momentary outdoor encounters are likely to spread the disease.

“Hi, does anyone think The Lot in Clarendon is a nightmare and coronavirus mega spreader?” asked another user, regarding the outdoor beer garden, in a post that received more than 100 comments.

“Businesses like The Lot are being constantly harassed… with no regard to state or federal guidelines on outdoor gatherings,” Loposser said. “There are dozens of posts in the ‘Arlington Neighbors’ group driving this ridiculous narrative… The group used to be a net positive in our community, and it’s devolved to ‘Lord of the Flies.'”

Loposser said the Facebook group is private and “can do what they want,” but decried treatment of those skeptical of the prevailing views around ways to prevent COVID-19 infections.

“People with minority viewpoints are constantly personally attacked in this group,” he said. “It’s certainly a microcosm of the kind of intolerance we see in liberal communities like Arlington… Stepping outside the majority groupthink will get you personally belittled and attacked.”

The “Arlington Neighbors” group has been trying to combat toxic discourse that seems endemic to any online forum of a certain size in 2020. In a new post this morning, co-founder Kellen MacBeth outlined new posting guidelines intended to make the group a more welcoming and helpful place.

Among them: no posting photos of people “with the intent to shame” and no “unverified information about businesses or COVID-19 that could cause harm.” 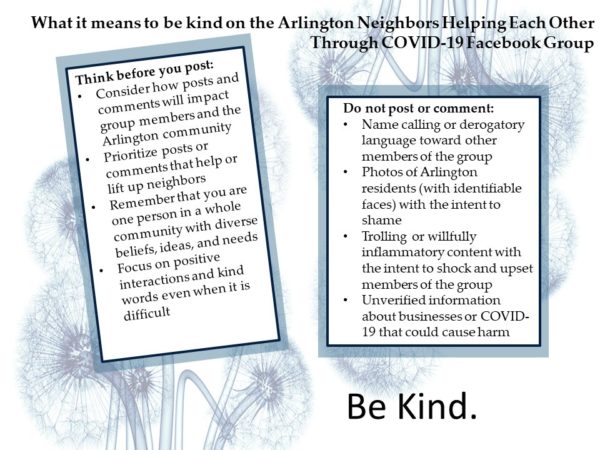