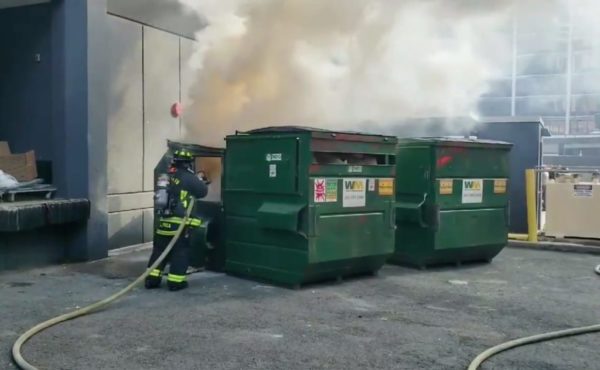 When it was founded, the Arlington Neighbors Helping Each Other Through COVID-19 Facebook group was an uplifting place where local residents could ask for help, share information, and connect with one another.

Now, as with just about any online forum of a certain size, the events of 2020 have darkened the skies over the formerly sunny space.

Contentious arguments break out, public shaming is a common occurrence, and at least one member had her employer contacted by someone upset at a post. 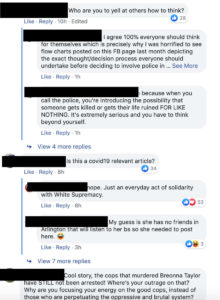 Granted, there are still plenty of heartwarming, helpful and innocuous posts. In fact, there are more posts than most people can keep track of — everything from school opening discussions to questions about car dealerships. But the darker side of online forums has nonetheless crept in.

“I think that there has been an increase in divisiveness,” conceded Kellen MacBeth, co-founder of the group, which now has more than 11,000 members. “It is likely driven by several factors — the increased size of the group and that the ‘coming together’ attitude that characterized March and much of April has been wearing off.”

“When the pandemic first hit, people were scared, searching for answers, and ready to help each other survive,” MacBeth continued. “Now that it’s become a somewhat ‘regular’ threat, people have settled back into routines less focused on getting through a crisis as a community and more so just trying to live life in this new normal. We also saw that as the size of the group increased, you inevitably get trolls and other people who join and don’t share the group’s values.”

The divisiveness isn’t just about the group’s size and the pandemic’s progression, though. It’s also about the many unknowns still surrounding COVID-19, leading to a cacophony of competing warnings and indignations, as well as the politicization of the virus. And it’s about those other big 2020 news stories: the Black Lives Matter movement and mass protests, and a heated presidential election.

Even though Arlington is a progressive stronghold, with social justice signs common even in the yards of the county’s more conservative neighborhoods, BLM-related posts in particular seem to frequently lead to online confrontation.

Last week Arlington Magazine published an essay by local resident Olamide Goke-Pariola, who recounted the vitriol she faced while “talking about racial justice and challenging my mostly white neighbors to think critically about their role in white supremacy” in the group.

“They consistently dismissed my lived experience,” she wrote. “One neighbor even told me my comments were ‘noise.'”

The “Arlington Neighbors” group is not alone in turning into a dumpster fire at times, however.

Things got so bad at the popular Fairlington Appreciation Society neighborhood Facebook group, in the wake of the killing of George Floyd, that its moderators shut it down for good. Before it closed, the group hosted battle royales on posts about social justice, with online shouting matches that were a digital counterpart to the battle over signs on a bridge playing out in the physical world nearby.

Even the usually chipper Mothers of North Arlington email listserv started to see moms turning on one another. The group faced accusations that it was dismissive of calls for social justice during the George Floyd protests and that it deleted a Black woman’s Facebook post on the subject.

ARLnow has seen its own share of added divisiveness. A half dozen commenters have been permanently banned for a pattern of racist comments over the past couple of months. Others have been placed on comment timeouts for engaging in extended flame wars. And there has been an uptick in criticism of our articles, with commenters on the site and Facebook questioning our coronavirus reporting and savaging our reporting about multiple COVID-19 cases at a private swim club.

The swim club story in particular highlighted the tribalism and conspiracy-mongering that is endemic to public online forums. Club members were quick to call the reporting inaccurate, both before and after the club confirmed the main focus of the story, and some went so far as to blame rival swim clubs for planting the story, as if it was part of a grand scheme to sully the pool’s good name.

Despite our public comment policy and attempts to judiciously enforce rules-based moderation, some articles on the site inevitably still descend into virtual bar fights. That has led us to close comment sections more frequently, and a steady barrage of complaints, both from those whose comments were removed and those who think we should remove the comment section altogether.

“Please stop having comments sections in your news articles,” said one person, anonymously. “I am seeing comments that are denying the existence of COVID-19 or precautions against it. ARLnow should not be used as a platform for such criminally negligent comments.”

“You want people to advertise with your publications, yet at the same time allow a complete sh*t-show to occur in each comments section?” said another, also anonymously. “Not a very good business model.”

On the geographically-constrained social network Nextdoor, meanwhile, arguments among neighbors have become common.

The site likes to say that “when neighbors start talking, good things happen.” Lately, though, that has not necessarily been the case. A post complaining about a lack of masks at a youth baseball game turned into an “insult-trading, debates-among-strangers” mele, as reported by the Falls Church News-Press. 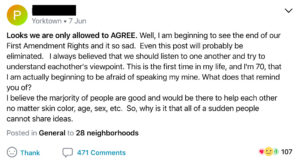 Also on Nextdoor, a man’s complaint about a post being removed — a post skeptical of the Black Lives Matter movement — received nearly 500 comments, from those in and around his North Arlington neighborhood. Even independent County Board candidate Audrey Clement jumped into the fray, engaging in racially-charged back-and-forth arguments.

“I guess it’s also racist to point out that black on black violence is no fun either — Rayshard Brooks’ rap sheet includes child abuse,” she wrote at one point, referencing the man fatally shot by police in Atlanta.

Nextdoor utilizes volunteer moderators and, while it encourages members to stay away from controversial topics with minimal local connection, that neighborly suggestion has largely been trampled by 2020. The San Francisco-based company has also faced scrutiny nationally for being an unwelcoming place for Black users in largely white neighborhoods, where posts cautioning of “suspicious” people of color are commonplace.

The moderators behind the “Arlington Neighbors” Facebook group, meanwhile, are trying their best to strike a balance between free speech and civility.

“In the beginning I was loath to remove anyone from the group and tried to encourage them to improve their behavior on the page,” MacBeth said. “Now we (the other 3 moderators and I) are much more willing to remove someone who is hurting the group or causing significant disruption.”

“Things came to a head when the BLM protests started happening, both because it was a significant shift from the typical posts on the page, but also because it exposed some raw feelings from people of color who felt overlooked, ignored, and oppressed while at the same time a few group members (pretty much all white) felt personally offended that they could not escape BLM posts on Facebook,” MacBeth recalled.

That has created a significant burden for moderators, who volunteer their time in the interest of achieving a greater community good.

More from MacBeth on the lengths the moderators have gone to in order to keep some posts from devolving into outright chaos:

We had members caling me and other moderators, sending us tons of private FB messages, and directing comments at us because they were upset about what was being posted on the group. We had to turn on universal post approvals because some people started posting outright racist things. We came out pretty quickly and made it clear to group members that BLM posts were appropriate and relevant but that still did not stop some group members from being adamant that those types of posts had no place on the page. We had to be hyper vigilant to the threat of racist and offensive comments that some people made and tried to be responsive as posts or comments were flagged for review, but at times it was difficult to handle. One of the most effective ways to handle bad group behavior has been to just remove someone from the group. It often seems that no amount of messages explaining why their comments were offensive, disrespectful, and unkind get through and the bad behavior continues. We made peace with the fact that some people could not be trusted to act like responsible adults and shouldn’t be allowed in the group.

We would use public messaging from myself or the moderators to remind group members what type of posts/comments were appropriate and what were not. We would reach out to members individually to address problem behavior or attempt to explain the issue if they reached out to us first because they were upset if we deleted their comment or post. We’ve since turned off universal post approval and have seen the page calm down a bit but there are certainly topics (whether political, about how to handle COVID, or school reopening) that stir up a lot of emotions and strong opinions. It’s a continual struggle to moderate the group and make sure that people are able to express themselves while also trying to stay true to the purpose of the group. I’m grateful to have the help from the moderators because it would be an impossible task to do alone. I don’t know that there’s a way to avoid division in a group of this size. There are some topics that bring us together and others that divide us. Universal agreement is impossible so we strive to ensure that communication is respectful, even if there is disagreement.

“At the end of the day, we’ve continued the group because I see more good than bad coming from it,” MacBeth concluded. “As long as that remains true, it will be worth the investment of time and energy to keep it running as smoothly as we can.”

Read more →
More Stories
Morning NotesTen Questions You Might Have About Recycling in Arlington, Answered