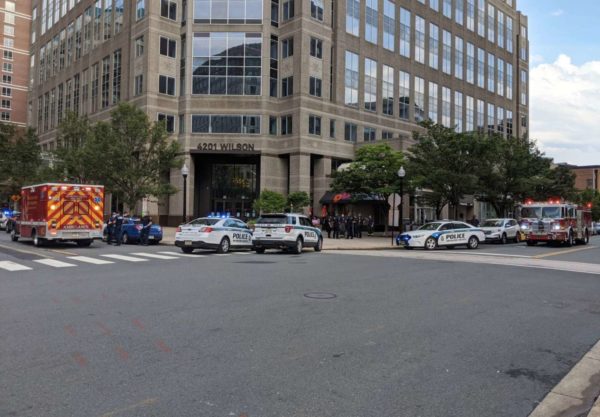 An Alexandria man is in custody after police say he punched a random person walking by in Ballston, and then headbutted and spat on a police officer.

The incident happened around 6 p.m. last night, along N. Randolph and Stuart streets, as well as Wilson Blvd, according to police and witnesses.

“Upon arrival, it was determined that the victim was walking in the area when the suspect allegedly began yelling at him and approached him,” says an Arlington County Police Department crime report. “The victim moved away from the suspect, who then allegedly struck him in the side of the head. The suspect then continued walking away, before arriving officers made contact with him.”

“The suspect was acting disorderly and actively resisted officers while being placed in handcuffs,” the crime report continues. At that point officers on scene called for backup, sending numerous other officers speeding to help, according to scanner traffic at the time.

“As medics attempted to evaluate the suspect, he spit on an officer,” the crime report alleges. “While conducting a search incident to arrest, the suspect struck an officer with his head, causing minor injuries. At booking, the suspect continued to act disorderly and spit on a deputy.”

One witness told ARLnow there were actually multiple victims, including himself. The incident, the witness said, started at the Dunkin Donuts on N. Stuart Street.

“He then walked east on Wilson Blvd assaulting random people, yelling racial and homophobic slurs, knocking down trash cans then throwing bottles at cars in the street,” said the witness, who captured a video (below) showing the suspect screaming as police tried to restrain him.

I have videos of the arrest down the street. I was one of the assault victims pic.twitter.com/PNp83Q2L6C