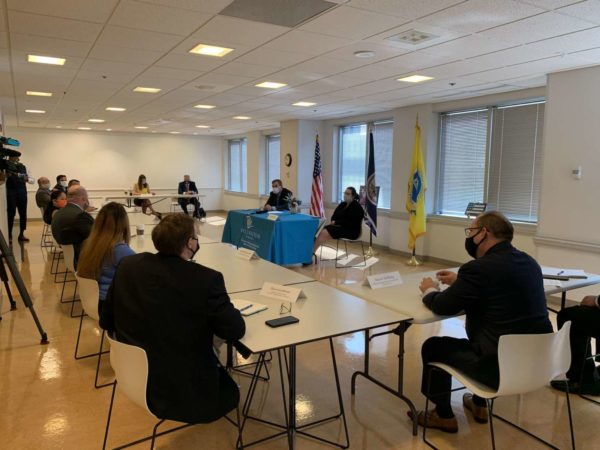 Warner discussed the threats he feels loom largest over November’s election, specifically stressing his concerns about recent changes made to the U.S. Postal Service.

He also heard from Arlington’s and Alexandria’s respective election directors as well as representatives of The Center for Election Innovation & Research, New Virginia Majority, the Brennan Center for Justice, Fair Vote and Microsoft’s Defending Democracy Program.

For Warner, foreign interference, the election system’s integrity and the risk COVID-19 poses to voter safety are the primary dangers facing the November 3 election, in which he is running for reelection.

Attendees raised worries about a national lack of funds for recruiting and training additional poll workers for this election’s unique circumstances. Inadequate public knowledge about the possibility that results may come in well after election, as well as  timelines for requesting mail-in ballots, were also cited as a problem.

“We’ve got to make sure we educate our voters about all the different small nuances that are coming out of the state,” David Hollberg, the marketing manager of the U.S. Postal Service’s NOVA district, said.

According to Gretchen Reinemeyer, Arlington County’s Director of Elections, the county has already received 20,000 requests for mail ballots, a record-setting increase from past years.

Warner recently sent a letter to Postmaster General Louis DeJoy, a former logistics executive, asking him to reverse changes he has made to the U.S. Postal Service that critics say have unnecessarily slowed operations and could impact how many mail ballots are counted in the election.

DeJoy, who was appointed by President Trump after being a major campaign donor, reassigned around 24 top Postal Service officials this past Friday, further provoking allegations of purposeful inefficiency.

“It’s more than a little fishy when you do a late Friday night reorganization of the management of the post office 85 days before election,” Warner told ARLnow. “Mr. Trump continues to try to undermine people’s confidence in absentee voting.”

Throughout the meeting, an overarching priority was ensuring that American voters will feel the November election was done fairly and without exterior influences.

“The voters have always had confidence … that their voices were going to be reflected in those votes,” Warner said. “Nothing would do Russia’s job better than for that confidence to be undermined.”