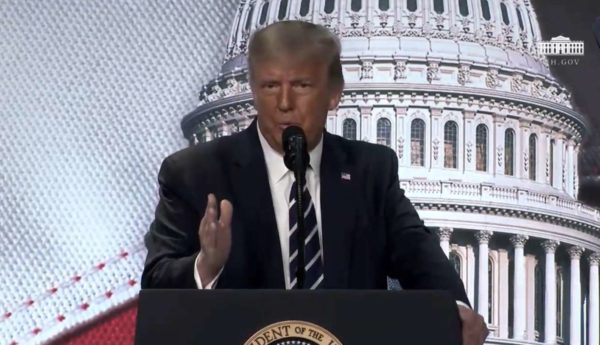 Pentagon City was abuzz with security personnel today as President Trump delivered a speech to a conference at a local hotel.

The president spoke at the 2020 Council for National Policy conference, hosted in the ballroom of the Ritz-Carlton hotel. He arrived around 11:45 a.m. and spoke for more than an hour, before departing via motorcade back to the White House shortly after 1 p.m.

Before the crowd of several hundred top conservative activists, President Trump spoke at length on a variety of topics.

Via Twitter, Pentagon City residents noted major police activity in the area, including road closures and a helicopter overhead. Reporters covering the event noted that many conference attendees did not seem to heed requests to physically distance and wear masks in the ballroom.

Very few masks and no social distancing at this event where President Trump is about to speak pic.twitter.com/uZUjoW7RR3