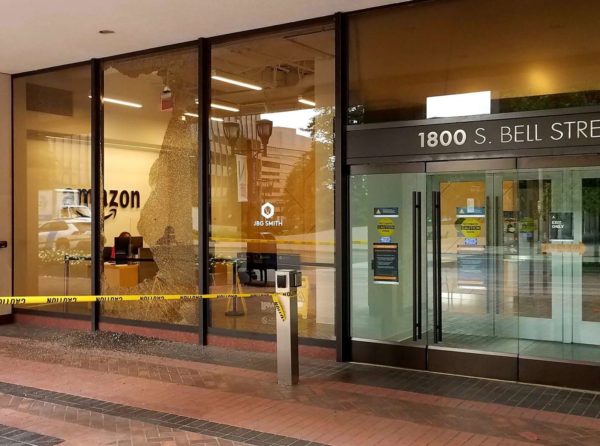 (Updated at 12:50 p.m.) A 26-year-old man has been arrested after he allegedly caused some minor mayhem in Crystal City last night.

Police say they the suspect, who was drunk, first asked a man for money, then — when the victim refused — struck him several times and sprayed him with a fire extinguisher.

The same suspect later threw a wine bottle at a window near the Crystal City Metro station, shattering it, before being spotted and detained by an officer nearby, according to ACPD. Photos from the scene this morning show a shattered window at one of Amazon’s temporary HQ2 spaces.

ROBBERY/DESTRUCTION OF PROPERTY, 2020-08300215/08310015, 18th Street S. at Crystal Drive. At approximately 10:35 p.m. on August 30, police were dispatched to the report of a robbery. Upon arrival, it was determined that the suspect allegedly approached the victim inside of a commercial building and requested money. The victim declined and suspect then struck the victim multiple times, implied he had a firearm and fled on foot. As the victim exited the building, he was approached by the suspect, who sprayed him with a fire extinguisher and again fled on foot. The victim was not injured. At approximately 12:53 a.m., an officer observed the suspect in the area of 18th Street S. and S. Bell Street and detained him without incident. During the course of the investigation, it was determined that at approximately 11:55 p.m., the same suspect allegedly threw a wine bottle at a window in the 1800 block of S. Bell Street, causing it to break. John Smith, 26, of No Fixed Address, was arrested and charged with Destruction of Property and Drunk in Public. The investigation into the robbery is ongoing.