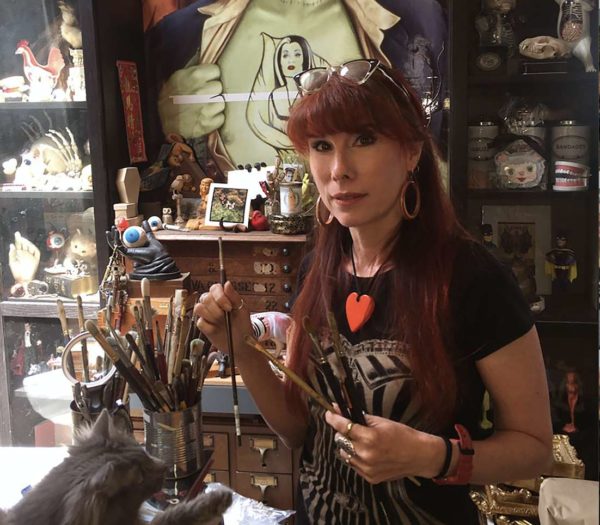 Isabel Samaras, who grew up in Arlington, has illustrated the cover of MAD Magazine’s October issue.

The cover is for MAD’s “Super Spooferheroes” issue and depicts Wonder Woman’s “Lasso of Tooth” extracting a tooth from the magazine’s iconic cover boy. Samaras is only the second woman to illustrate a MAD cover in the magazine’s 68 year history.

In addition to creating art for publication and for sale, Samaras is a professor at the California College of the Arts in San Francisco.

Samaras spent most of her youth in Arlington, attending Glebe Elementary, Swanson Middle School and Washington-Lee (now Washington-Liberty) High School. She describes her younger self as being a bit of an outsider navigating through Arlington Public Schools.

“I was kind of an oddball, out there flapping away on the fringes, a nerd and an art nerd, some kinda double whammy that probably made me socially radioactive,” Samaras said. 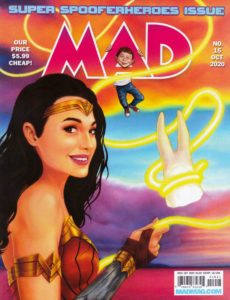 Samaras credits her mom for first sparking her interest in art. When Samaras was young, her mother would construct paper dolls for her to play with. Samaras said seeing the possibilities for what an ordinary object could become fascinated her.

“It seemed like an incredible magic trick to me — this ability to make something, to make toys out of humble office supplies,” Samaras said. “I wanted to be able to do that, too.”

In high school, Samaras painted murals around W-L’s building, including seahorses in the cafeteria. She also painted backdrops for the drama department and was the art director for Penman, the school’s literary magazine.

At W-L, Samaras said her art teacher, Roy Anderson, played a huge role in her artistic growth. He encouraged her to try printmaking at a class in George Washington University’s Corcoran School, and motivated her to apply to Parsons School of Design in New York City, where Samaras attended college.

“He really pushed me to try things that were outside my comfort zone,” Samaras said. “I think about Mr. Anderson a lot these days, about the power of a teacher to light candles, to ignite excitement.”

Growing up, Samaras said MAD Magazine was a coveted treat to read. She remains an avid reader of the satirical magazine today, even as its national popularity wanes. To have her work on the cover, and to be the second woman to ever do so, “is a pretty big, tingle down to the toes, thrill,” Samaras said.

“When I was a kid, and for most of my life, I never saw any women artists in MAD, so it didn’t even occur to me as a possibility that someday I’d see my own work there,” Samaras said. “I’m a subscriber — still — so having the issue with my art on the cover show up in the mail was a completely surreal experience.”

The Wonder Woman parody on Samaras’ cover, which keeps with the MAD cover tradition of spoofing pop culture, is also in line with Samaras’ earlier work.

Samaras said her most popular work blends fictional characters with classic historical paintings. She’s painted Frankenstein and his bride as Mary and Joseph in a nativity scene, Batman dressed as a classical lord and a non-frightening Morticia Addams of The Addams Family holding a child.

Lately, Samaras has been doing more personal work, like painting hands to express different emotions. In these pieces, Samaras said she aims to give her audience a glimpse into how she sees the world.

“Ultimately I’m trying to create beauty, but there’s a lot of energy embedded in a painting,” Samaras said. “You spend an enormous amount of time dreaming them up and creating them — it’s not just a metaphor that you pour yourself into them, you really do… But mostly I’m just hoping that there’s a feeling of connection. A painting in a frame is like a tunnel or a window, from my world to you.”