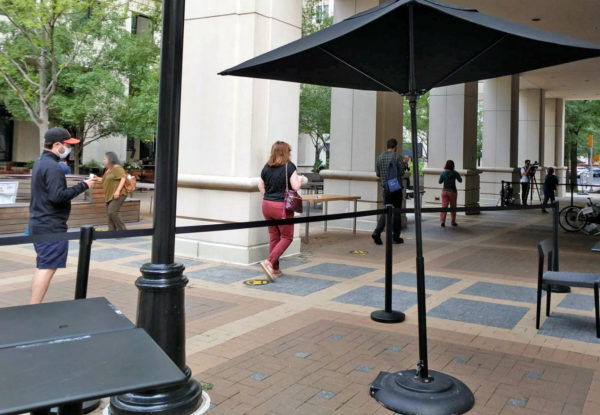 Arlington residents were lined up down the block in Courthouse this morning, on the first day of early voting in Virginia.

The county’s elections office said on Twitter that 200 people cast ballots in the first hour this morning, after voting opened at 8 a.m.

Any registered voter who wants to vote early can do so through Oct. 31, at designated early voting locations. Currently, voting is taking place at the former Wells Fargo bank (2200 Clarendon Blvd) near county government headquarters in Courthouse. Four community centers will also open for early voting on Saturday, Oct. 17.

Voters who don’t want to show up to the polls in person, for fear of COVID-19 or otherwise, can request mail-in ballots through Oct. 23. The first of the ballots are being sent out today. As of early August, about 17,000 Arlingtonians — 10% of active voters — had requested mail-in ballots, according to the elections office.

More information on how to vote in the upcoming general election is available on Arlington County’s 2020 Voter Guide website.

More views of the line via social media:

Polls open in Virginia, and 5 min in, turnout is strong! @ARLnowDOTcom People exercising their civic duty – it just gets me in the feels every time. #verklempt pic.twitter.com/1AfRQVzv0p

92 voters in queue before polls open for early voting at 8am in Arlington Virginia. pic.twitter.com/len5SnoFEY

Out in Arlington, Virginia to cover the start of in-person early voting in the US. Virginia is one of 4 states that starts in-person voting today. Line winds around the courtyard at this voting site, probably 45 people long pic.twitter.com/4XQ3vmNeu4