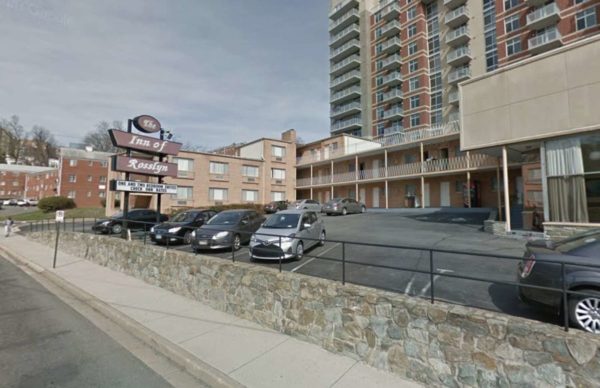 A 25-year-old Arlington man is behind bars after police say he broke into a hotel room early this morning and assaulted a woman inside.

The incident happened around 2 a.m. on the 1600 block of Arlington Blvd, which is home to the Inn of Rosslyn motel.

Arlington County police say the man banged on the locked door of the hotel room before forcing his way in and grabbing the woman “around the upper torso.” She fled and called police. The suspect was later spotted by officers banging on another building door in Rosslyn and taken into custody, police said.

BURGLARY, 2020-09230019, 1600 block of Arlington Boulevard. At approximately 1:48 a.m. on September 23, police were dispatched to the report of a breaking and entering. Upon arrival, it was determined that at approximately 1:40 a.m. the victim was awoken by noise from the suspect allegedly banging on the door to a secured hotel room. The suspect subsequently forced entry to the room, causing damage, and grabbed the woman around the upper torso. The victim was able to free herself from the suspect, who then fled on foot. Arriving officers established a perimeter, canvased the area, and a K9 track was conducted. At approximately 2:07 a.m., police were dispatched to the 1700 block of N. Quinn Street, where a male matching the suspect description was banging on the door to a building. Arriving officers located the suspect and took him into custody without incident. During the course of the investigation, it was determined the suspect had also caused damage to a shed located outside of the building on Quinn Street. Nomin-Erdene Begzjav, 25, of Arlington, Va., was arrested and charged with Burglary with Intent to Commit Assault, Assault & Battery, and Destruction of Property (x2). He was held on no bond.