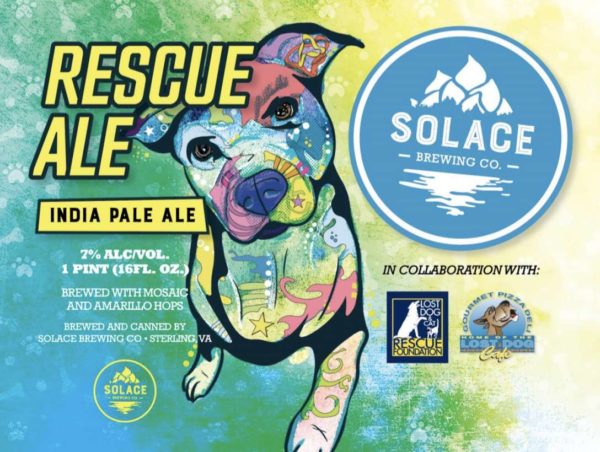 An Arlington pet rescue and a Dulles brewery have joined forces for a unique fundraiser that will help find new homes for dogs and cats in need.

The Lost Dog and Cat Rescue Foundation has partnered with Solace Brewing Company for the second year in a row to produce a special Rescue Ale that will be sold to raise money for the nonprofit, which is dedicated to rescuing homeless, abused, and neglected pets and facilitating their adoption.

This year’s Solace-produced Rescue Ale is an India Pale Ale brewed with mosaic and Amarillo hops at 7% alcohol by volume. It will be available for sale at the Solace Brewery on Oct. 8 and at all Lost Dog Café locations — including on Columbia Pike and in Westover — starting at 5 p.m. on Oct. 9.

The collaboration enables the rescue foundation to continue an annual tradition of working with local breweries despite challenges caused by the need for social distancing during the pandemic.

“Our annual fundraiser has always been an extremely important driver for engaging with the broader community, garnering resources, and ultimately gaining supporters that strengthen our important rescue mission,” Lost Dog and Cat Rescue Foundation public relations manager Kim Williams said. “With the generosity of Solace Brewing Co., the Rescue Ale tradition is still alive, and people can enjoy a charitable beer in the comfort of their home while supporting a worthy cause.”

A portion of all Rescue Ale sales will be donated to the foundation.

In the past, the Lost Dog and Cat Rescue Foundation hosted large fundraising events like a “Paws Vegas” carnival held at Solace Brewing Company last October, but because crowds currently pose public health risks, the nonprofit has pivoted instead to an auction with tickets for a private tour of Solace Brewing Company.

On top of a guided tour, ticket winners will get to see the canning process for this year’s Rescue Ale and receive a catered lunch, a four-pack of the Rescue Ale, Lost Dog Café and Solace Brewing Co.-branded pint glasses, and a Rescue Ale 2020 T-shirt.

The Lost Dog and Cat Rescue Foundation is also holding an outdoor adoption event at Solace Brewing Company on Oct. 10. Masks and adherence to social distancing rules will be required.

The foundation, which has a rescue care center facility in Falls Church, says it has rescued 2,183 pets and facilitated the adoptions of 2,015 dogs and cats in 2020 so far.