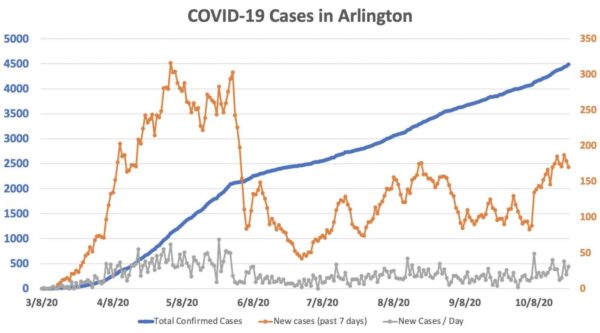 Arlington County has, for the past couple of weeks, seen a higher level of new coronavirus cases — but there’s been a ceiling on the case growth.

Since Oct. 10 the seven-day trailing average of new daily cases has remained in a range from the low- to mid-20s. That number was largely in the teens throughout September.

The trailing average peaked on Wednesday, at 26.7 daily cases — the highest point since June 2. As of today, it stands at 24.3.

Thirty-one new cases were reported in the county overnight, according to Virginia Dept. of Health data. One new COVID-related death and seven new hospitalizations were also reported, bringing the cumulative total of both to 153 and 531, respectively.

The current seven-day total of new hospitalizations in Arlington is now 13, the highest point since Sept. 5.

The pandemic is taking a turn for the worse, in terms of case growth, both nationally and internationally. And, in a potentially ominous sign for Arlington Public Schools and its back-to-classrooms plan, the Boston public school system cancelled in-person instruction for high-needs students this week after a jump in cases there.

This is going the wrong way really, really fast. https://t.co/ho78NLhq1z

Regionally, however, it’s a mixed bag.

To the south of Arlington, Alexandria recorded the lowest test positivity rate in Virginia this week, while to the north Montgomery County is considering tougher restrictions amid a rise in cases.