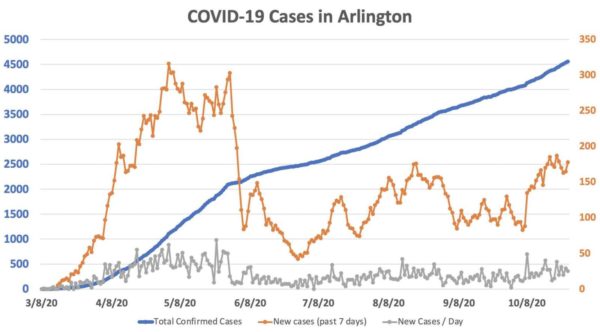 As of Friday, Arlington County had a trailing seven-day average of just under 25 new coronavirus cases per day. As of Monday morning, it’s just above 25.

The average has fluctuated but remained between 20 and 27 cases per day since Oct. 10. While elevated compared to the rate of new local cases throughout September, past couple of weeks have not seen the kind of grown in new cases found elsewhere in the U.S. and Europe.

In fact, Arlington’s test positivity rate has dipped in recent days, and currently stands at a relatively low 3.3%. Over the past three days, one new COVID-related death and only two new hospitalizations have been reported, according to Virginia Dept. of Health data.

Experts, however, are sounding the alarm that cases — followed by hospitalizations and deaths — are likely to continue rising in the months ahead nationwide.

“We’re likely to see a very dense epidemic,” former FDA Commissioner Dr. Scott Gottlieb told CNBC this morning. “We’re right now on the cusp of what’s going to be exponential spread in parts of the country.”

In the U.S., the average daily rate of new COVID-19 cases is at an all-time high, which helped to send the Dow Jones Industrial Average down more than 900 points earlier today.

“More than 20 states reported record-high numbers of average daily new cases, and cases are rising by 5% or more in 40 states, according to CNBC’s analysis,” the network reported.

In Virginia, the state is seeing growth in new cases, driven in part by a surge in Southwest Virginia.

The weather may be playing a role. Other coronaviruses are seasonal — worse in the winter than the summer — and early research suggests that COVID-19 may indeed be more severe in colder weather. Anecdotally, colder weather has seemingly corresponded to a rise in cases in Alaska and elsewhere.

Arlington saw a stretch of seasonally warm weather end on Sunday. Over the next 10 days the weather forecast calls for daily highs in the low-50s to mid-60s.