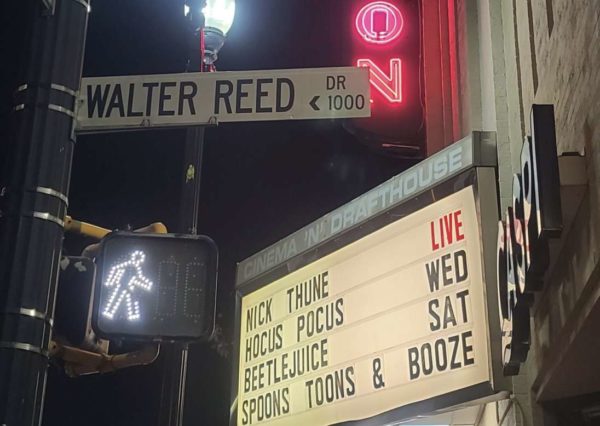 After new movie releases came to a grinding halt due to the pandemic, the Arlington Cinema and Drafthouse (2903 Columbia Pike) has pivoted to older movies, alternative events, and a greater reliance on live comedy.

Since reopening in August, the Drafthouse has shown classic films and cartoons, and brought in live stand-up comedians for groups no larger than 85 people, or 30% of the space’s capacity.

“Movie attendance is down across the board with all theaters,” Clark said. “Comedy has been fairly steady and now we’re trying fun stuff.”

This week, Clark is leaning into spooky season with Halloween-themed events.

This weekend, “Spoons, Toons and Booze,” a Drafthouse special event with free cereal, cartoons and brunch-themed cocktails, will show cartoons from the 1940s to present day that feature creatures who go bump in the night. Tonight, “Witches and Wine” ticket holders get to celebrate Wine Wednesday and watch the cult classic “Hocus Pocus.”

Wednesday night’s event, with half-priced wine, has sold at least 40 tickets, “which is incredible for an old Disney film,” he said. Another cult classic, Beetlejuice, is set for Saturday, Sunday and Monday.

“Witches and Wine” may bring out crowds for the novelty, but most showings of old films are not bringing people out. Half of the films to which Drafthouse has access are available on-demand or on cable, Clark noted. Comedy is now the driving force for filling seats at the Drafthouse.

“I think it’s going to be comedy-driven for a while before movies return,” Clark said.

With Christmas season seemingly coming earlier and earlier each year, Clark is already preparing creative, fun and themed holiday events. He’s hoping for something of a holiday miracle: a return to normality sooner rather than later.

“I’m not sure where we’re going to be in a couple of months as a country, but at this point, with a 30% reduced capacity, it’s not a long term sustainable model,” he said. “It helps a bit, but there’s only so much you can do.”

The schedule for the rest of the year includes weekends of stand-up comedy and a Mongolian film called “Six Feet” about what humans have done in response to the coronavirus pandemic.

More live comedy is already on the schedule for 2021, including “Curb Your Enthusiasm” star Jeff Garlin on March 26 and 27.