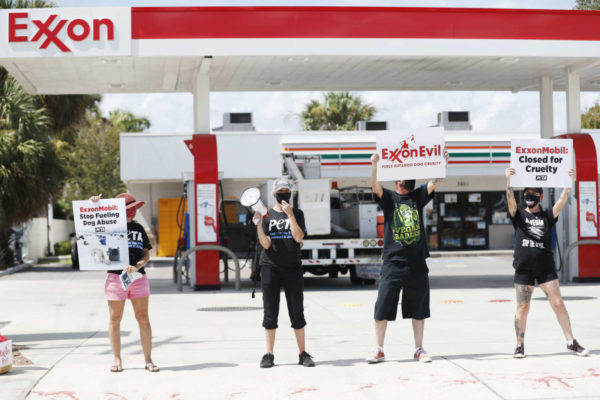 The People for the Ethical Treatment of Animals is hoping to fuel a discussion about dog sled races with a protest tomorrow at a local gas station.

PETA is planning a protest, starting at noon on Thursday, at the Exxon station on the corner of Old Dominion Drive and Military Road in Cherrydale. At issue: ExxonMobil’s support of the Iditarod dog race in Alaska.

“Because ExxonMobil continues to pump money into the deadly Iditarod dog race even as other sponsors have pulled out, PETA supporters armed with yellow caution tape and ‘blood’-filled gas jugs will ‘close’ a local ExxonMobil station for cruelty tomorrow,” the organization said in a media advisory this afternoon.

The action follows another PETA protest, in September, at ExxonMobil’s Texas headquarters.

More on why the Iditarod is worthy of protest, even as far away as Arlington, according to PETA:

“ExxonMobil has the shameful distinction of being one of the last major companies still sponsoring the Iditarod’s cruelty to dogs,” says PETA Executive Vice President Tracy Reiman. “PETA is urging it to stop propping up an evil industry that forces dogs to run so far and so fast that they often die after inhaling their own vomit.

Jack Daniel’s, Coca-Cola, Wells Fargo, Alaska Airlines, and many other companies cut ties with the race after PETA pointed out that more than 150 dogs have died in the Iditarod since it began. In addition to being tied up on mushers’ properties (as revealed in this PETA exposé), dogs are forced to pull heavy sleds across 1,000 miles through blinding blizzards and subzero temperatures.

More than 220 dogs were pulled off the trail during the 2020 race because of exhaustion, illness, injury, or other causes. One, Cool Cat, developed twisted intestines and almost died. Another, Betty, had pneumonia and was in critical condition, and two others refused to eat and had fevers, diarrhea, and persistent coughs.