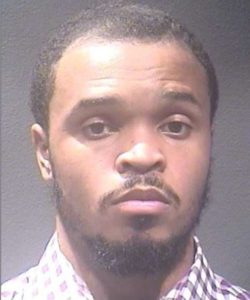 (Updated at 11:30 a.m.) A 23-year-old from Stafford, Virginia is behind bars after police say he followed and groped a woman on a trail and stalked two others in Clarendon and Courthouse.

The first incident happened around 10 a.m. on a Tuesday in September. A woman was walking on the Custis Trail when she noticed a man following her. The man then caught up to her and groped her, before fleeing, according to Arlington County police.

Then, on the afternoon of Monday, Oct. 9, the man followed two different women in Clarendon and Courthouse, even following them into businesses, prompting calls to police, according to ACPD.

Police announced this morning that they had arrested Lamar McCarthy of Stafford and charged him with sexual battery and two counts of felony stalking. He is currently being held in the county jail.

This is not the first time the 23-year-old has been accused of such crimes. From the Falls Church News-Press in May:

Falls Church police said they arrested the man responsible for a string of incidents over the past few weeks where he either followed or chased after women on both the W&OD Trail and through residential neighborhoods.

Lamar Dontae McCarthy, a 23- year-old from Stafford, was charged with assault for his latest instance on Saturday, authorities said.

McCarthy is facing an assault and battery charge in connection to the May incident, one of three such incidents in Falls Church this spring, according to the paper. He appears to have been released on bond after his May arrest.

Arlington police are now asking any other potential victims of McCarthy to step forward.

The Arlington County Police Department’s Special Victims Unit is announcing the arrest of a suspect charged after following three women walking in Arlington County. Lamar Dontae McCarthy, 23, of Stafford, VA was arrested and charged with sexual battery and two counts of felony stalking. He is being held in the Arlington County Detention Facility on no bond.

At approximately 9:58 a.m. on September 8, police were dispatched to the 3100 block of Lee Highway for the report of an assault just occurred. Upon arrival, it was determined that the female victim was walking on the trail when she observed the suspect walking towards her from a distance. She subsequently turned around and began walking away from the suspect, who increased his pace, closing the distance between them. The suspect caught up to the victim, grabbed her hip, and touched her inappropriately. The victim yelled, prompting the suspect to flee on foot prior to police arrival.

At approximately 1:27 p.m. on October 9, police were dispatched to the 3000 block of Wilson Boulevard for the report of a suspicious person. Upon arrival, it was determined the victim was walking in the area when the suspect followed her into a business. The victim recognized the suspect from a previous encounter in April and contacted police.

At approximately 3:37 p.m. on October 9, police were dispatched to the 2300 block of Clarendon Boulevard for the report of a suspicious person. Upon arrival, it was determined the female victim was on a walk when she noticed the suspect following her. The victim attempted to evade the suspect by taking various routes, sitting in a park and entering a business. The suspect continued to follow, prompting her to contact police.

This remains an active criminal investigation. Anyone with past inappropriate encounters with the suspect or who has additional information related to this investigation is asked to contact Detective P. Peña at 703-228-4183 or [email protected] Information may also be provided anonymously through the Arlington County Crime Solvers hotline at 1-866-411-TIPS (8477).