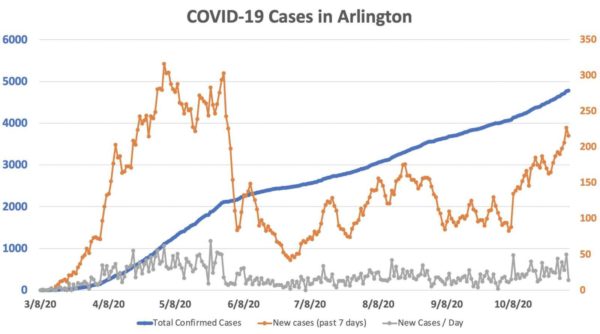 (Updated at 10:50 a.m.) The seven-day rate of new coronavirus cases in Arlington reached the highest point since May over the weekend.

Fifty new cases were reported on Sunday, bringing the trailing seven-day total to 227. That’s the highest point since May 31, when Arlington’s spring epidemic was starting its rapid descent.

Only 14 new cases were reported overnight Monday, bringing the trailing seven-day total back down a bit. Meanwhile, the county’s test positivity rate has been rising in recent days and now stands at 4.2%, the highest point since early September.

No new COVID-related hospitalizations nor deaths were reported over the weekend in Arlington, according to Virginia Dept. of Health data. But Mike Silverman, the ER chief for Virginia Hospital Center, said on Friday, in a weekly public Facebook post, that the emergency room “experienced an uptick in cases this week.”

“Our hospital census is noticeably increased, our percent positive rate on symptomatic ER patients and on asymptomatic testing is up, and the number of ER patients who meet our ‘enhanced isolation’ status increased a fair amount,” Silverman said. “This last one is particularly interesting and concerning to me. Those numbers of patients have been really steady for a couple of months. There was a little uptick last week but it was close enough to be considered normal variability. This week had a significant uptick compared to last month.”

Silverman went on recommend continued mask wearing, citing research that suggests that those wearing masks are less likely to wind up in the hospital for COVID-19.

Across the country, hospitalizations in most states increased over the course of October, while the rate of new coronavirus cases hit a new national record on Friday. Closer to home, Virginia hit another record for new cases over the weekend; case counts in Northern Virginia have also been increasing.

During a weekly COVID-19 virtual town hall with the County Board, held on Friday, Dr. Reuben K. Varghese, the public health director for Arlington, said that the earliest a vaccine could be expected would be between January and April. But not everyone will want it, he said.

“Everyone would say they want a vaccine right now,” Varghese said. “Once it seems like it’s available, the desire drops credibly.”

In administering a vaccine, the county will not be able to prioritize everyone equally, he said. Those living and working in long term care facilities and those working in hospitals will be first on the list.

Next
Audrey Clement: Why You Should Vote for Me