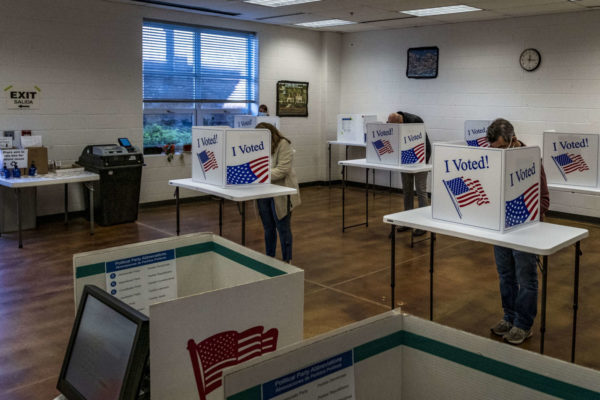 (Updated at 6:30 p.m.) It’s been a relatively quiet day at the polls in Arlington for one of the most contentious presidential elections in modern memory.

As of 4:30 p.m., only 13% of active voters had showed up at the polls. But that’s in addition to the 63% that had already voted via early voting or mail-in ballots as of Sunday.

As of 1 p.m., no more than 500 voters had cast ballots at any one Arlington precinct, Reinemeyer said. No issues have been reported at the polls so far, she added, though there have been numerous provisional ballots requested — likely a result of those who requested mail-in ballots deciding to vote in-person instead.

As for what to expect tonight, Reinemeyer said the bulk of the results should be released early on, after the polls close. Some 100,000 early votes that had been counted by Sunday should be tabulated and on the state election website shortly after 7 p.m.

Voting Update: As of 4:30 p.m. just over 13% of Arlington voters have turned out on Election Day.

Polls close in 1.5 hours. Remember, if you are in line at your polling place by 7 p.m. you are eligible to cast a ballot. #ArlingtonVotes