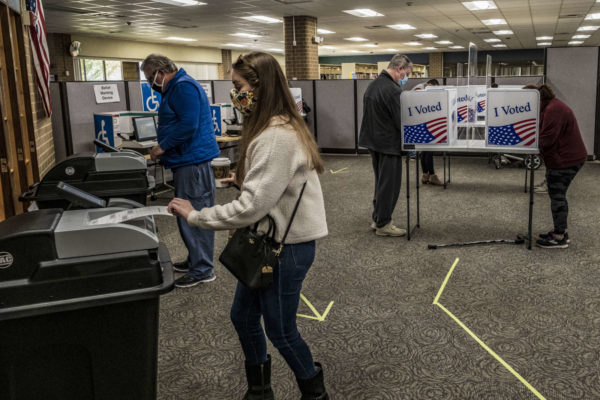 It’s Election Day and across Arlington County thousands are voting at dozens of polling places staffed by hundreds of volunteers.

So far no issues have been reported at the polls, election officials tell ARLnow.

Turnout may be lighter than usual for a hotly-contested presidential election, on account of 63% of active voters in Arlington having already cast early and mail-in ballots. As of 9:30 a.m., the county elections office said that “an estimated 5% of remaining voters” had voted since the polls opened at 6 a.m.

“Polling places were busy early, but most are running smoothly now,” the elections office said.

On the ballot in Arlington this year is the presidential race — President Donald Trump (R) facing off against former Vice President Joe Biden (D), plus Libertarian candidate Jo Jorgensen — along with races for U.S. Senate, House of Representatives, County Board and School Board. There are also referenda for two proposed state constitutional amendments and five county bond issuances.

An estimated 5% of remaining voters in Arlington cast ballots during the first three hours this morning. Polling places were busy early, but most are running smoothly now. A great time to head out to vote! #ArlingtonVotes pic.twitter.com/7NBSSypcZ7

Thank you to our 864 Election Officers that have ensured we could keep all 54 polling places open today! https://t.co/0SgCBI4Zcq

END_OF_DOCUMENT_TOKEN_TO_BE_REPLACED

More Stories
Morning NotesYes, Virginia, There Is a Santa Claus (At the Mall This Year)