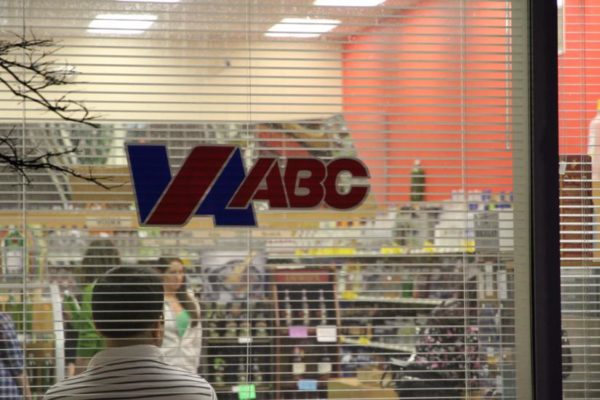 A motorcycle-riding burglar, dressed in all black, smashed the glass front door of the Virginia ABC store in Ballston early this morning.

The burglary happened around 3:30 a.m. Monday, on the 800 block of N. Quincy Street. Arlington County police say the man “stole items of value” from the liquor store before fleeing on a motorcycle.

BURGLARY, 2020-11090026, 800 block of N. Quincy Street. At approximately 3:38 a.m. on November 9, police were dispatched to the report of a burglary just occurred. Upon arrival, it was determined that the unknown suspect forced entry to a business by shattering part of the glass door. The suspect stole items of value before fleeing the scene on a motorcycle. The suspect is described as a male, wearing a black jacket, black pants, a black ski mask, black gloves and carrying a backpack. The investigation is ongoing.

A resident photographed the aftermath of the glass-shattering crime:

Also in Monday’s ACPD crime report are a pair of violent incidents from over the weekend.

Around 7 p.m. on Saturday, on the 1100 block of S. Hayes Street in Pentagon City, police say an 18-year-old man brandished a knife at the employee of a business and swung a glass bottle at security personnel.

More from the crime report, with the suspect’s name omitted:

ATTEMPTED MALICIOUS WOUNDING, 2020-11070179, 1100 block of S. Hayes Street. At approximately 7:03 p.m. on November 7, police were dispatched to the report of disorderly conduct. Upon arrival, it was determined that the suspect approached a kiosk and began picking up items. When the employee engaged the suspect in conversation, the suspect pulled a folded knife from their pocket and put it back multiple times while continuing to walk around the kiosk. Security then escorted the suspect out of the area. The suspect returned shortly after, allegedly brandished the open knife and began to chase the employee. Security intervened and the suspect picked up a glass bottle and attempted to strike the security personnel who was able to knock the bottle from the suspect’s hand. The suspect left the scene on foot prior to police arrival but was located by responding officers with the assistance of security. [The 18-year-old suspect], of Washington D.C. was arrested and charged with Attempted Malicious Wounding, Assault and Disorderly Conduct and was held without bond.

Early Sunday morning, in Clarendon, a man was attacked by a group of 7-8 people after two groups got into a fight. From ACPD:

MALICIOUS WOUNDING BY MOB, 2020-11080031, 3100 block of 10th Street N. At approximately 2:03 a.m. on November 8, police were dispatched to the report of a fight. Upon arrival, officers located the male victim on the ground in need of medical attention. He was transported to an area hospital with injuries that are considered non-life threatening. The investigation determined that two groups had gotten into a fight in the 3200 block of 10th Street N. The groups separated and left in different directions. The victim was walking alone in the area of  N. Hudson Street and 10th Street when approximately 7 – 8 individuals, believed to be involved in the earlier fight, exited a vehicle and began to chase after him. The suspects knocked the victim to the ground before assaulting him. The suspects fled the scene prior to police arrival. The investigation is ongoing.