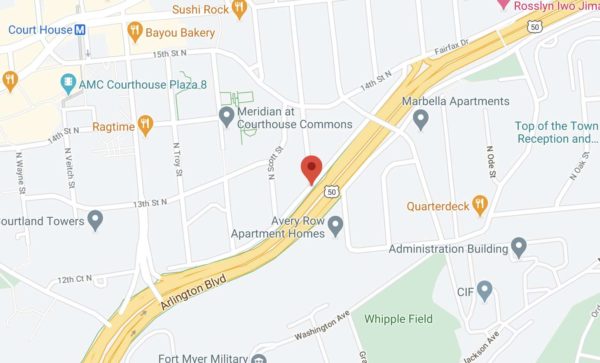 Arlington County police are searching for a man they say tried to rape a woman near Courthouse last night.

The incident happened around 10:45 p.m. in the Radnor/Fort Myer Heights neighborhood.

The victim was walking her dog alone when the suspect allegedly started chasing her. He fell on top of her at the corner of Fairfax Drive and N. Rolfe Street, then tried to remove her pants, but a witness started yelling at the suspect and he ran of, according to ACPD.

Officers on the ground and a police helicopter tried to find the man, but the search was unsuccessful.

A search of the area returned with negative results. Police remain on scene investigating.

The Arlington County Police Department’s Special Victims Unit is investigating an attempted rape in the Radnor/Ft. Myer Heights neighborhood that took place on the evening of November 17, 2020.

At approximately 10:47 p.m., police were dispatched to the 1300 block of N. Rolfe Street for the report of an attempted rape. Upon arrival, it was determined that the female victim was walking her dog along the N. Rhodes Street bridge over Arlington Boulevard when she noticed the male suspect begin to follow her. The victim picked up her pace to a run in an attempt to separate herself from the suspect who then began to chase after her. At the corner of Fairfax Drive and N. Rolfe Street, the victim and suspect fell to the ground. The suspect ended up on top of the victim, told her not to talk and attempted to remove her pants. A witness heard the victim yelling and called out to the suspect. The suspect froze and the victim was able to run away. Responding officers established a perimeter and canvased the area with negative results.

The suspect is described as a Black male in his 20’s, approximately 6’0″, 225-250lbs with broad shoulders. He was wearing a black hoodie with the hood up, dark jeans and a navy-blue face mask at the time of the incident.