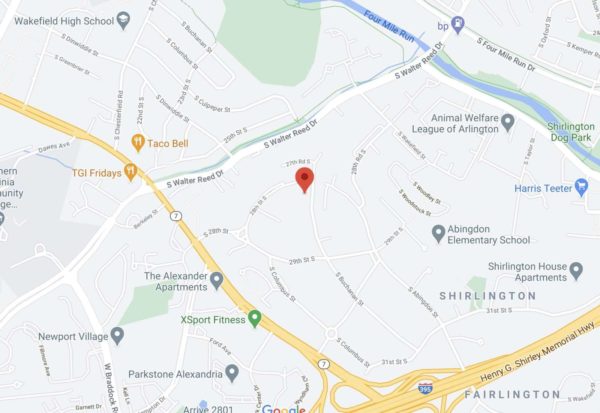 A gunshot was fired during a robbery in the residential Fairlington neighborhood last night, according to police.

The incident happened around 9:45 p.m. on the 2800 block of S. Buchanan Street, a couple of blocks from Abingdon Elementary.

A woman was robbed by two male suspects, one of whom was armed with a gun, during a “pre-arranged sale of narcotics,” Arlington County Police said in a press release Sunday afternoon. After the robbery, the armed suspect allegedly fired a single gunshot in the victim’s direction.

The Arlington County Police Department’s Homicide/Robbery Unit is investigating an Armed Robbery and Attempted Malicious Wounding in the Fairlington neighborhood that took place on the evening of December 5, 2020.

At approximately 9:48 p.m., police were dispatched to the 2800 block of S. Buchanan Street for the report of an armed robbery. The investigation revealed the female victim and two unknown male suspects were meeting at the location for the pre-arranged sale of narcotics. Suspect One approached the victim and engaged her in conversation. Suspect Two then approached, knocked her to the ground, brandished a firearm and demanded cash before stealing her purse. The suspects fled the scene on foot and fired a single shot in the direction of the victim. She was not injured. A perimeter was established by responding officers and a canvas of the area returned with negative results.

This remains an active criminal investigation. Anyone with information related to this incident and/or home surveillance that may assist the investigation is asked to contact the Arlington County Police Department’s Homicide/Robbery Unit at 703-228-4180 or [email protected] Information may also be reported anonymously through the Arlington County Crime Solvers hotline at 1-866-411-TIPS (8477).