Virginia State Police say gunfire was exchanged between two cars headed northbound, between Shirlington and Pentagon City. One driver was shot and suffered serious injuries, while the other vehicle — a Nissan Maxima with a Texas license plate — remains at large.

The shooting prompted the temporary closure of northbound I-395 near the Pentagon last night.

INCIDENT: Police Department Activity
LOCATION: NB 395 at Shirlington
IMPACT: NB 395 is closed at Shrlington for police activity, avoid the area and use an alternate route. pic.twitter.com/AcsjhvsEGO

“At 10:36 p.m. on Nov. 18, Virginia State Police received a call about a Toyota Corolla and Nissan Maxima exchanging gunfire as the vehicles were traveling north on I-395 just south of S. Glebe Road,” state police spokeswoman Corinne Geller said this morning. “The Toyota was fired upon again as the same two vehicles passed by the S. Joyce Street overpass.”

The driver of the Toyota was shot, but kept driving into the District. He stopped at a Metro station and was given first aid by police before being rushed to the trauma center at GW Hospital for “serious, but non-life threatening, injuries.”

WTOP reports that the victim was a Metro employee and that he was shot in the shoulder in what’s described as “an apparent road rage incident.” No gun was recovered from the victim’s vehicle.

State police are still investigating the shooting, noting that “there is no evidence of any other vehicles being fired at or damaged during the course of the shootings.”

“The dark-colored Nissan Maxima with Texas plates has yet to be located,” Geller said. “Anyone who may have witnessed the incidents or has information about the suspect vehicle is encouraged to call Virginia State Police at 703-803-0026 or email us at [email protected]” 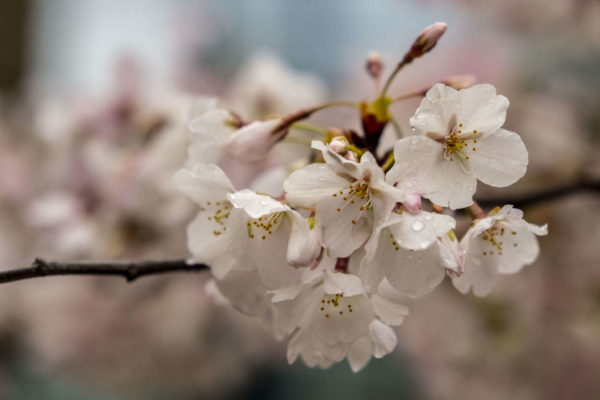 Coronavirus Cases at Arlington Nursing Home — “Rossie Bratten, a 21-year-old Virginia resident, is calling on nursing homes to be more transparent about COVID-19, claiming an Arlington facility caring for his mother never informed the family of positive cases at the site. Bratten claims they only called to be told their mother had tested positive.” [Fox 5, YouTube]

Construction Continuing at DCA — “The coronavirus pandemic has slowed air travel to a trickle, but it has not hindered Project Journey at Reagan National Airport. The Metropolitan Washington Airports Authority reports that the new 14-gate north concourse at Reagan Airport remains on schedule to open in July 2021.” [Washington Business Journal]

Bullet Hole Found in Roof of Douglas Park Home — “At approximately 2:31 p.m. on April 13, police were dispatched to the report of a missile into occupied dwelling. Upon arrival, it was determined that contractors performing maintenance on the victim’s house located a hole in her roof and recovered a bullet in the crawl space. There is no suspect(s) description. The investigation is ongoing.” [Arlington County]

Sen. Ebbin Lauds Signing of Marijuana Bill — “The prohibition on cannabis has for too long had life long impacts on Virginians and disproportionately affected communities of color. Thank you @GovernorVA for signing my and @C_Herring’s bills to decriminalize marijuana.” [Twitter]

(Updated at 2 p.m.) Someone fired a gunshot into the air early Saturday morning during a dispute in the Arlington Mill neighborhood.

The incident happened in the area of Tyrol Hill Park, on the 5100 block of 7th Road S., a few blocks north of the Arlington Mill Community Center on Columbia Pike.

WEAPONS VIOLATION, 2019-06010010, 5100 block of 7th Road S. At approximately 12:45 a.m. on June 1, police were dispatched to the report of shots fired. Upon arrival, it was determined that the reporting party was in the area when he heard the sound of a single gunshot and then observed numerous individuals running out of a park. Arriving officers canvased the area and located a vehicle matching the description provided in a lookout and initiated a traffic stop. It was later determined that the vehicle occupants were in the park when they observed a dispute between known individuals escalate and the suspect fired one shot into the sky, prompting them to flee in the vehicle. No injuries were reported. The investigation is ongoing.

Arlington County Police were called to the Nauck neighborhood three times over the weekend for reports of gunfire.

The shots fired calls came in Friday night, early Saturday morning and Sunday afternoon, police said, with multiple 911 callers reporting gunfire. No one was reported to be shot in any of the incidents.

A resident tells ARLnow that the first shooting was loud enough to be clearly captured on her security camera.

“Seven gunshots went off around 11:15 p.m. on Friday night,” said the resident, who wanted to remain anonymous. “Police were called and about four SUVs and cruisers were seen canvassing the neighborhood for about 30 minutes afterward.”

Officers found bullet holes in a house on the 2100 block of S. Monroe Street after the second shooting Saturday morning. For each of the other shootings, ACPD says “no evidence of shots fired was located.”

Police are asking for the public’s help investigating the shootings. More from an ACPD press release:

The Arlington County Police Department is investigating multiple reports of shots heard in the Nauck neighborhood over the weekend. In one incident, officers located evidence confirming multiple shots had been fired in the area. No injuries have been reported.

At approximately 11:18 p.m. on April 5, police were dispatched to the report of shots heard in the 3400 block of 25th Street S. Upon arrival, officers canvased the area and met with the reporting party but no evidence of shots fired was located.

At approximately 4:16 a.m. on April 6, police were dispatched to multiple reports of shots heard in the 2100 block of S. Monroe Street. Upon arrival, officers located bullet holes in the side of a residence. No injuries were reported.

At approximately 2:14 p.m. on April 7, police were dispatched to multiple reports of shots heard in the 2400 block of S. Lowell Street. Upon arrival, officers canvased the area and met with the reporting party but no evidence of shots fired was located.

The investigation into these incidents is ongoing. Anyone with information is asked to contact Arlington County Police at 703-558-2222. Information may also be provided anonymously through the Arlington County Crime Solvers hotline at 1-866-411-TIPS (8477). 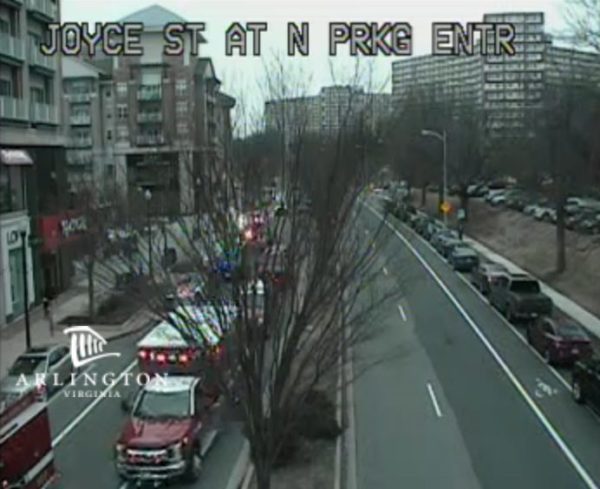 Update at 7 p.m. — The situation ended after police found the subject dead in the apartment, per ACPD.

UPDATE: The subject was located deceased and ACPD is now conducting a death investigation. Based on the preliminary investigation, this is an isolated incident with no known threat to the community.

Initial reports suggest gunshots were heard inside the apartment of a man who may be suffering a mental health issue.

Emergency responders are taking a cautious stance before potentially entering the apartment. Some vehicle and pedestrian traffic in the area, near the Pentagon Row shopping center, is being restricted.

A man is facing charges after police say he fired a shot inside a residential building in the Ballston area.

Police arrived at a building on the 3900 block of Fairfax Drive just before 1 a.m. last Friday after a person inside reported hearing a loud noise, then found a small hole in the wall and a metallic object.

During their investigation, police determined that a man in a neighboring apartment had been cleaning a gun and it accidentally discharged, shooting a bullet into, and creating damage to, the other apartment.

Police charged 28-year-old Alexander Kreitle with discharging a firearm into an occupied building.

No injuries were reported from the incident.

Police are looking for a man who shot up a vehicle with a BB gun in the Nauck neighborhood last week.

The incident happened Wednesday night along S. Shirlington Road. Police responded to a parking lot for a report of gunshots. They arrived and found a vehicle damaged by BBs, but the suspect had already fled and could not be located.

DISCHARGE FIREARM/MISSILE INTO OCCUPIED BUILDING, 2018-03070203, 2200 block of Shirlington Road. At approximately 8:10 p.m. on March 7, police were dispatched to the area after a witness reported hearing shots fired inside a parking garage. Arriving officers canvased the area and located a vehicle with damage from a BB gun. The suspect fled the scene prior to police arrival. No injuries were reported. The suspect is described as a black male with curly, reddish dreads, wearing a black jacket. The investigation is ongoing.

END_OF_DOCUMENT_TOKEN_TO_BE_REPLACED

Someone fired gunshots at a group of four juveniles walking down the street in the Nauck neighborhood last night.

Police did not report a possible motive for the Sunday night shooting, only saying in a crime report that a vehicle with three males inside approached, shots were filed “in the direction of the juveniles” and the suspects drove off. The kids were unhurt.

ATTEMPTED MALICIOUS WOUNDING, 217-12030213, 24th Street S. at Shirlington Road. At approximately 8:16 p.m. on December 3, police were dispatched to the report of shots fired. Upon arrival, it was determined that four juveniles were walking in the area when they were approached by a vehicle with three black males inside. One of the occupants of the vehicle brandished a firearm and fired shots in the direction of the juveniles. The vehicle fled the scene prior to police arrival. It is described as a large black van or SUV. There is no suspect(s) description. The juveniles were uninjured. Officers canvased the area with negative results. The investigation is ongoing.

The shots were fired around 2 a.m. on the 1000 block of N. Vermont Street, according to Arlington County Police. No injuries were reported.

RECKLESS HANDLING OF A FIREARM (late), 2017-06130094, 1000 block of N. Vermont Street. At approximately 11:03 a.m. on June 13, officers responded to the report of a suspicious circumstance. Upon arrival, it was determined that at approximately 2:00 a.m. a resident heard a loud noise and later discovered two bullet holes in a shared wall of his residence. Police responded, conducted an investigation which is ongoing at this time.

(Updated 4:55 p.m.) A man has been found dead inside a residence on N. Adams Street where police were investigating a shots fired called.

There is no threat to the public, according to Arlington County Police, and the investigation is ongoing.

Police said sheriff’s deputies were serving an eviction notice when they heard a single gunshot.

Officers responded to reports of gunshots being heard on the 2000 block of N. Adams Street, near the Lyon Village neighborhood, around noon Tuesday.

Department spokeswoman Ashley Savage said police were trying to determine whether shots were fired from inside the building.

A local resident reported seeing nearly a dozen police cars at the nearby intersection with Lee Highway.

According to scanner traffic, police were joined in the investigation by sheriff’s deputies, and were searching inside the apartment building as well as around its perimeter. Other officers were directing vehicles around the scene and pedestrians going in and out of the building lobby. 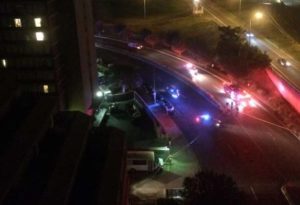 A man fired several gunshots in the air a block from a main entrance to the Pentagon reservation, according to an Arlington County Police crime report.

The shots were fired during a fight between two groups outside the Doubletree hotel on Army Navy Drive in Pentagon City.

No one was hurt and so far no arrests have been made, according to police.

DISCHARGE OF A FIREARM, 160925005, 300 block of S. Army Navy Drive. At approximately 1:00 a.m. on September 25, police were dispatched to the report of shots fired. The investigation revealed a physical confrontation between two groups had ensued and one male subject discharged a firearm several times into the air. The suspect is described as a black male, approximately 6’2″ tall and wearing a black cap, light blue shirt, and blue jeans. There were no injuries reported.