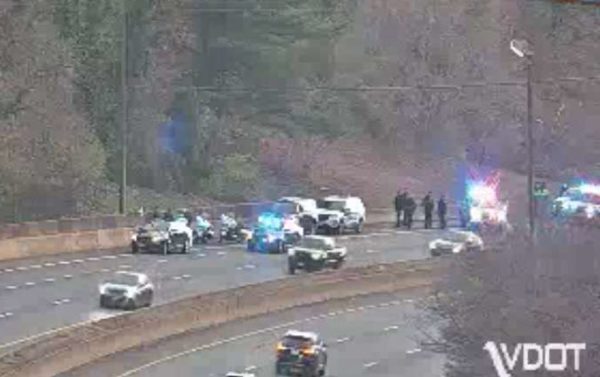 A 33-year-old man has been arrested and charged with dragging an Arlington County police officer with his car after being pulled over for speeding on I-66.

The incident happened around 4:30 p.m. Tuesday on eastbound I-66, near Spout Run Parkway, and drew a large police response.

A motorcycle officer pulled over a driver for traveling 88 mph in a 55 mph zone. Then, after smelling marijuana, the officer requested the driver get out of the vehicle and sign the speeding ticket, according to an Arlington County Police Department crime report.

“The driver initially complied but became uncooperative and attempted to enter the vehicle after commanded not to do so,” the department said. “A brief struggle ensued, during which the officer advised he would deploy [pepper spray] if the suspect continued not to comply.”

“The officer deployed their OC Spray in an attempt to gain control of the driver, however he was still able to re-enter the vehicle,” the report continues. “As the suspect fled the scene in the vehicle, he dragged the officer for a short distance. The officer suffered minor injuries and was treated on scene by medics.”

A lookout for the vehicle was broadcast, but police were unable to find it. Then, after using “various investigative tools,” police were able to get in touch with a family member of the suspect, who subsequently turned himself in last night.

“Ahmad Rahim, 33, of Chantilly, Va., was arrested and charged with Malicious/Unlawful Wounding of Law Enforcement, Eluding, Reckless Driving, and Obstruction of Justice,” police said. “He was held on no bond.”

Update on 12/17/20 — The officer who was dragged is Officer Adam Stone, a well-liked veteran of ACPD’s Motor Unit. Department spokeswoman Ashley Savage declined to provide additional details about the incident, “to ensure the integrity of the investigation and prosecution.”

A little video from the @ArlingtonVaPD activity on I-66E before Spout Run. Early info is a vehicle sped off from a motor officer during a stop. @ARLnowDOTcom https://t.co/ogqsle6kTA pic.twitter.com/YwqMC2BbZp