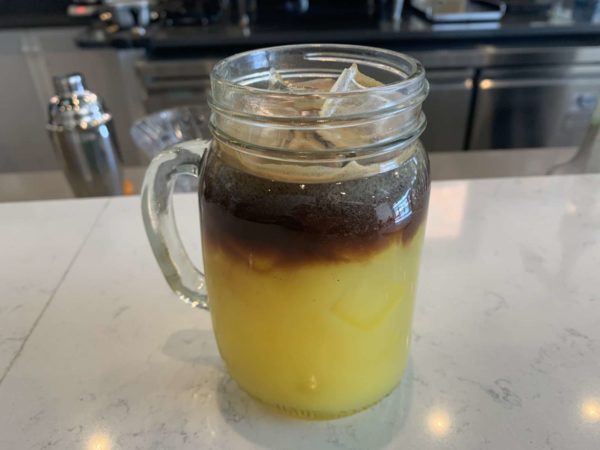 Don’t worry, bumble coffee — that concoction of orange juice, caramel and espresso over ice — is still on the menu at the cafe formerly known as This is Fine Coffee in Clarendon.

Kino Coffee has the same menu, but its offerings now include independent movies.

In May, owners Jason Blevins and Anna Tsybko converted a back room of their shop at 2607 Wilson Blvd into a small pop-up cinema. They painted the walls black and installed a large screen for indie films and documentaries.

Blevins and Tsybko opened This is Fine Coffee in January, taking over the space previously occupied for three years by Blümen Cafe.

“Nothing was wrong with [the old name],” Blevins told ARLnow. “There’s a bit of humor with ‘This Is Fine,’ but 2020 killed some of the humor with it. When we started to incorporate a pop-up cinema to the business model, we found it harder to convey that in the name. So, we chose ‘Kino’, which means movie theater in Russian and German and a bunch of languages.”

Due to COVID-19 restrictions, the theater can only hold nine people, and tickets will be $8. The first movies will start premiering next month, and the theater has partnered with Magnolia Pictures to showcase new films, including “Stray” in March.

“We just opened seating inside two weeks ago,” Blevins said. “Until then, we actually hadn’t had anyone in the whole entire space longer than it took for them to pick up their coffee and leave.”

Blevins studied film at New York University, and said that old cartoons and silent movies from the Soviet Union will play in the theater on most days.

“We have movies going on in the back room and Eastern European-inspired drinks and pastry options,” he said.

Among Kino’s offerings is one sure to keep you awake during the slow scenes: the Atomic Bumble, an eye-opening mix of ghost pepper, espresso, orange juice and tonic water over ice.

“We just hope that people appreciate a different experience in terms of cinema and supporting independent businesses,” said Blevins.