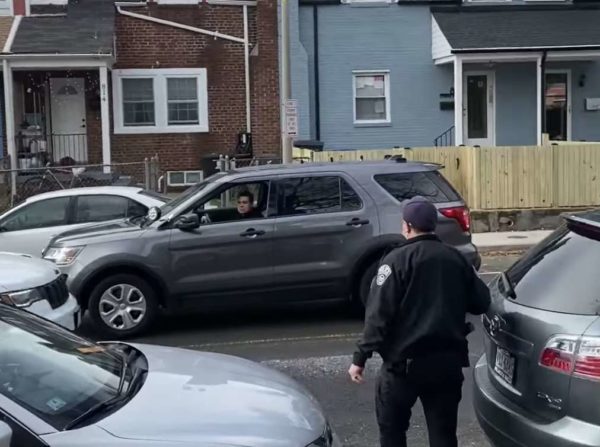 (Updated at 11 a.m.) The Arlington County Police Department says the officers who questioned a Black man for taking photos in the Foxcroft Heights neighborhood acted properly and professionally.

The Dec. 21 incident, which sparked headlines and a strong condemnation from the Arlington branch of the NAACP, happened after police were called to the neighborhood by someone who found real estate photographer Marlon Crutchfield to be suspicious.

In a Facebook post, Crutchfield said he was confronted by “nosy neighbors,” who then called police when he declined to explain why he was taking photos. Several officers arrived and, in a brief interaction that was video recorded, Crutchfield refuses the officers’ request to hand over an ID. Shortly after that, the officers appear to leave.

In response to a series of questions posed by ARLnow, a police department spokeswoman explained the series of events leading to the encounter, and defended the officers’ actions and the need to respond the call, which was placed by someone only identified as “a community member.”

“At approximately 10:35 a.m. on December 21, police were dispatched to the report of a suspicious person and vehicle in the area of Southgate Road and South Orme Street,” ACPD spokeswoman Kirby Clark said. “The reporting party advised dispatch that the male subject had been taking photos of the Southgate entrance to Joint Base Myer-Henderson Hall, and people walking provided additional information that the subject had left the area of the entrance and entered a nearby residence.”

The website OpenMHz captured audio of the initial police dispatch.

Clark said the response was justified based on the information provided to police.

Military installations are considered high value targets and events around the world, to include the events of September 11, 2001, have shown this to be true. If someone is taking photos of these areas, it is certainly cause for concern, and is worthy of reporting to law enforcement for investigation based upon guidelines published by the United States Department of Homeland Security. The area by the base is posted with signs prohibiting photography and, for this reason, the base was notified of the report the department had received.

The Department has a responsibility to respond to calls for service, investigate the circumstances, and determine appropriate action. Dispatched calls for service are based upon preliminary information provided by the reporting party and follow-up investigations may identify additional, or different, information than initially provided.

We recognize the emotional impact this incident has had on the involved individual The Department is committed to the principle that all individuals will be treated with dignity and respect and we will work with the community to achieve balance between ensuring the safety of our community and the ambiguity involving what may be considered suspicious.

Asked if officers should have done anything differently, ACPD defended their actions and professionalism.

The Department stands by its response to this incident. In order to ensure public safety within our community, officers have a duty to respond to dispatched calls for service and fully investigate the circumstances surrounding them. Efforts to address crime in our community are most effective when they involve strong collaboration and partnerships between law enforcement and the communities and citizens they serve.

While the behaviors described to ACPD were considered suspicious in nature given all of the circumstances, it was determined that no local crime had been committed, officers cleared the call without taking further action, and the entire interaction with the individual lasted under four minutes.

We appreciate that what constitutes suspicious behavior can be ambiguous, but we must work together to ensure police are notified of suspicious behaviors that could represent a threat to our community, while at the same time ensuring that the focus remains on the behaviors of a person and nothing else. […]

Our officers conducted themselves in a professional manner and came to the determination that no local crimes had occurred.

The Arlington NAACP, however, said in response that the police department should have investigated the origin of the initial complaint, which they claim was embellished in order to provoke a police response.

“ACPD should have started with the alleged witnesses before harassing a professional photographer and embarrassing him by pulling him out of the home where he was an invited guest and interrogating him in front of his client,” the organization said to ARLnow, in a statement.

“The police asked for the victim’s ID before even explaining why they were there or even asking him if he was near the base or what his activities were before entering the clients home,” the organization said. “That is sloppy police work guaranteed to elicit an emotionally charged response. Asking for ID first and only is a racially laden request in the Black community.”

What is perplexing is that the ACPD said that they do a “full investigation” however, to our knowledge, they NEVER spoke to the reporting party. If they had they would have discovered (a) that the report that the victim was out of his car taking photos was a lie (b) that walking to Joint Base Myer-Henderson Hall on S. Orme St. talking photos and then going on his clients home took way too much time given the report thus (c) that the activities reported made no sense and the police would have concluded that Joint Base Myer-Henderson Hall reference was just a ruse to get a police response to a Black man in their neighborhood.

The full investigation ACPD promises should have started with the alleged witness. If they had done that, they would never have approached the victim. The report on its face was not credible and certainly did not require 3-5 police cars to respond to.

Like the Central Park incident in NYC, this call to police was exaggerated in a way which creates a robust police response.

The local NAACP added that even if Crutchfield was taking photos of the base, he wouldn’t have captured anything that cannot otherwise be seen on the internet.

“Photos of Henderson Hall and the gate are easily found and publicly available as photos on Google Earth and Google Maps,” the organization said. “Given the close relationship ACPD has with the base, a mere call to the base should have sufficed. This is just an excuse not a valid justification for a response.”

But police said taking photos of the base could indeed be against the law.

“Responding to calls for service involving suspicious persons, vehicles, activity or circumstances is an important tool for law enforcement that often has the potential to disrupt possible criminal behavior, identify individuals who may pose a risk to our community, and further ongoing investigations,” said Clark. “During this particular call for service, it was reported that the individual was taking photos of an area with posted signage prohibiting photography pursuant to 18 U.S. Code § 795.”

Asked whether this incident points to the need for any ACPD policy changes, Clark pointed out that a review of police practices has been taking place.

“The Department regularly reviews its policies and procedures to ensure they are in alignment with best practices, reflective of our Department and Community values, and ensure compliance with standards set forth through the Virginia Law Enforcement Professional Standards Commission,” she said. “Several of the police department’s policy areas are currently being reviewed by the Police Practices Group to ensure consistency with best practices.”

“The NAACP has identified several obvious areas in need of improvement. Starting with how officers are trained. Then with dispatch protocols and improvements to investigative techniques, what should occur before an ID is requested, follow up with the reporting party when the report turns out to be false, and referring false reports to the Commonwealth Attorney,” the organization said. “The fact that police finally backed down and left without gathering any information or the ID shows that even the police didn’t consider the report to be a serious threat.”

“This is reminiscent of the LaFayette Square debacle,” the NAACP said. “Business as usual has no place in the post George Floyd era.”