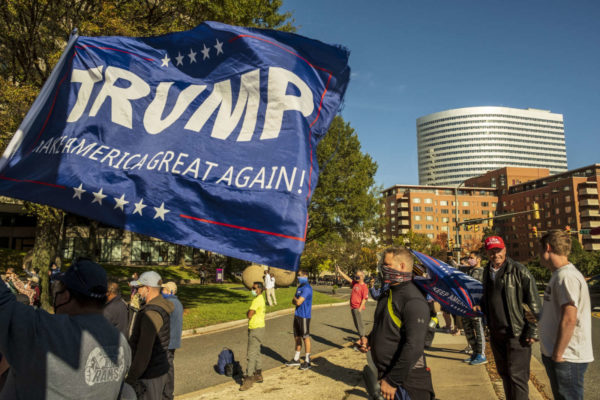 (Updated at 2:50 p.m.) Arlington County police officers will be deployed to D.C. as mutual aid during pro-Trump rallies and counter-protests, starting today, ARLnow has learned.

The Arlington County Police Department tells ARLnow that they have received and agreed to a request from the D.C. Metropolitan Police Department for mutual aid assistance for both today (Jan. 5) and tomorrow (Jan. 6).

“Arlington County has agreed to this request,” police spokesperson Ashley Savage said. “ACPD officers will be in D.C. and available to assist our regional law enforcement partners in maintaining peace and order in the event of a significant disturbance or unrest.”

The Arlington County Board, meanwhile, is urging residents to refrain from counter-protesting across the river, as thousands of Trump supporters descend on the region for demonstrations in the District.

The president has encouraged a large show of support among the MAGA faithful, ahead of Wednesday’s Congressional certification of the presidential election, as he continues to make unproven claims that the election was stolen.

Yesterday (Jan. 4), Arlington’s elected officials urged local residents to not jump into the fray, as clashes between protesters and counter-protesters are expected in D.C.

“This Board upholds free speech and the right for all to peacefully demonstrate,” Arlington County Board Chair Libby Garvey said in a press release. “We understand the desire to show support for our election processes, for democracy and the constitution. But my colleagues and I have a responsibility to our constituents to keep them safe. With far-right extremist groups broadcasting their desire to engage in violent acts to upend the results of the presidential election, we ask everyone to stay home on January 6 so the District of Columbia can better manage the situation.”

Previous rallies in November and December both ended in violence, particularly after sunset, and additional threats of violence this week have been reported in online forums.

This has led Arlington and other local jurisdictions to caution residents to avoid D.C. on those days.

“Mayor Bowser has asked that people not come to the city to counter-protest, to avoid inflaming an already dangerous situation,” Garvey continued. “We support her request.”

It’s also believed that a number of supporters and Proud Boys, a far-right extremist group defined by the Southern Poverty Law Center as a “hate group,” are staying at local hotels.

For the December protests, organizers suggested that attendees to stay in Crystal City. However, a number of counter-protesting groups asked hotels like the Crowne Plaza Crystal City and the Holiday Inn National Airport to refuse rooms to those coming for those rallies.

On social media, protesters coming to the area could be seen discussing hotel availability in Arlington over the past couple of days.

A protest against the Proud Boys was set to take place yesterday outside of the Holiday Inn in Alexandria, where it was thought that a number of members were staying. But that protest was canceled due to safety concerns.

The department has mutual aid agreements with a number of local and federal law enforcement agencies. This includes an agreement with U.S. Park Police, which came under fire this past summer when ACPD sent riot gear-clad officers to assist with crowd control near Lafayette Square.