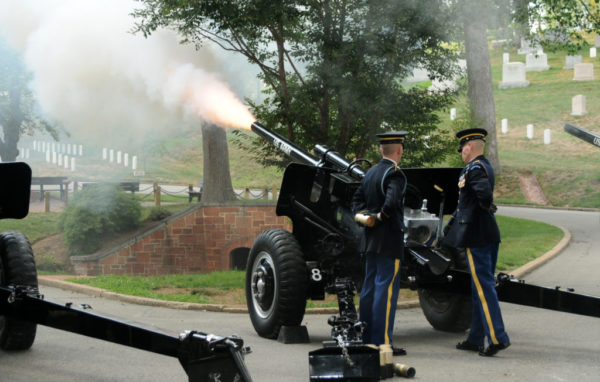 The D.C. area is a bit on edge, and the sounds of howitzers firing this afternoon probably won’t help. But it’s necessary to prep for next week’s inauguration.

The cannon fire at Fort Myer often can, depending on weather conditions, be clearly heard in parts of Arlington and D.C.

The drills are held as practice for “ceremonies in honor of the President of the United States, for visiting foreign dignitaries, during official government ceremonies, regional celebrations… and while rendering honors during the funeral services of our nation’s fallen service members and veterans,” a base spokeswoman previously told ARLnow.

Noise Notice:
Please be advised the @USArmyOldGuard, Presidential Salute Battery, will conduct blank fire drills in preparation for the 59th Presidential Inauguration this afternoon and tomorrow on the Fort Myer portion of the Joint Base. @MDW_USARMY pic.twitter.com/bCSBcgmo1F

Photo by Sgt. Jose A. Torres Jr courtesy of Joint Base Myer-Henderson Hall

END_OF_DOCUMENT_TOKEN_TO_BE_REPLACED

More Stories
Boring Title: 3 Reasons You Should Consider Refinancing Your Mortgage NowStylish Trenton Square at Ballston — Just Around the Corner