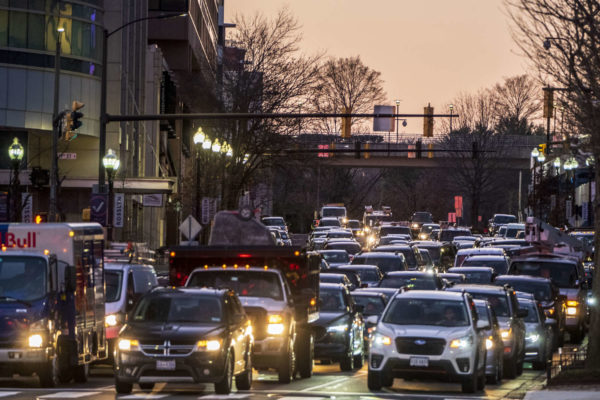 Arlington is continuing its final preparations for a presidential inauguration unlike any other.

In wake of the U.S. Capitol riots and a still-raging pandemic (though, cases are currently on a downward trajectory), tomorrow’s inauguration of President Joe Biden will be a scaled-down and highly militarized affair.

A number of bridges connecting Arlington to D.C. are either completely shut down or have significantly altered traffic patterns.

Memorial Bridge is now closed through Thursday morning at 6 a.m. D.C.-bound lanes on the Roosevelt Bridge and the 14th Street Bridge will also be closed until Thursday morning, but lanes leaving the city “will flow normally” according to a Metropolitan Police Department traffic advisory. There are also a host of D.C. road closures.

Key Bridge will remain open, but there’ll be no access to Whitehurst Freeway and only local traffic may turn right on M Street. Thru traffic can only turn left onto Canal Road/MacArthur Blvd, according to the advisory.

Chain Bridge will remain open in both directions, as well as the Wilson and American Legion Bridges connecting Virginia to Maryland. Despite the unprecedented bridge closures today, traffic on N. Glebe Road leading to Chain Bridge appeared little changed from a typical weekday, suggesting that between the pandemic and the inauguration many would-be commuters were staying at home.

Traffic on the Key Bridge was heavy this morning (as seen in the photo above), as was the traffic being diverted from the 14th Street Bridge.

The county is advising residents to use the live cameras that are set up to monitor traffic.

On Friday, a joint statement from Virginia lawmakers said that this inauguration “will see the strongest Capital-area security response in history” and local law enforcement is trying to have a response “that balances protecting public safety in a manner commensurate with available intelligence about threats without going too far.”

Reiterating previous statements, the Arlington County Police Department says there will be an increased “visible and non-visible” police presence in the county tomorrow. ACPD also remains in contact with neighboring law enforcement agencies about changing information and intelligence.

At this time, there are still no known threats to Arlington County, and the department still hasn’t committed to providing resources outside of the county on Inauguration Day, per ACPD spokesperson Ashley Savage.

Newly unsealed court documents, meanwhile, reveal that members of Oath Keepers militia, a far-right extremist group currently being investigated by the FBI, booked rooms for January 5 to 7 at the Comfort Inn hotel in Ballston, ahead of the January 6 storming of the Capitol.

In a Facebook message referenced in the documents, a Oath Keepers member said that the location would allow them to “hunt at night.”

Newly unsealed charging docs: Virginia man, member of Oath Keepers militia allegedly involved in coordinating travel to DC for others. Sent a FB message on 1/1 saying the hotel they'd booked was a good location that would allow them to "hunt at night" https://t.co/SbhKZEUjE8 pic.twitter.com/SZmXnXtmSf

Earlier this month, Arlington County Board Chair Matt de Ferranti told ARLnow that the county was aware of at least one local hotel hosting Trump supporters. The situation was monitored, he said, but no behavior there rose to a level of concern at the time.

ARLnow contacted Comfort Inn and was told by an hotel employee that management “definitely does not want to comment” on the allegations included in the documents.

We also have reached out to the hotel’s parent company Choice Hotels, but have yet to hear back as of publication time.

Jo DeVoe contributed to this report.

END_OF_DOCUMENT_TOKEN_TO_BE_REPLACED

More Stories
Good Guy With Gun Robbed of Gun By Bad Guy With GunHighlander Motel is Now Closed, Will Be Torn Down For a CVS in March