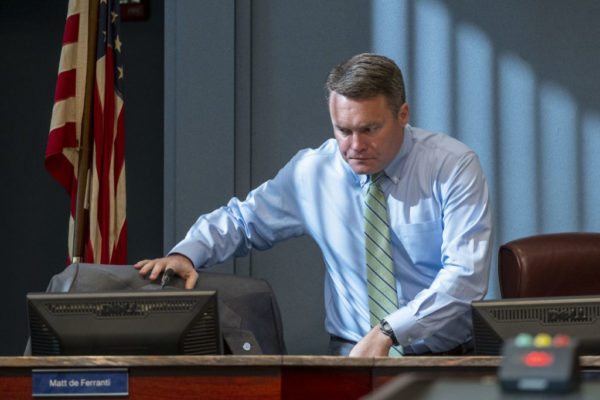 Yet, he was already faced with a crisis and had to determine how to best protect the citizens of Arlington during one of the more frightening days in modern American history when a mob of Trump supporters rioted at the U.S. Capitol.

In an exclusive interview, de Ferranti tells ARLnow that he heard from more than 300 Arlingtonians via emails and calls throughout the day. He was also in conversation with County Manager Mark Schwarz and Alexandria mayor Justin Wilson.

Based on those conversations, he convened a closed meeting of the County Board at 4:45 p.m to discuss “the events that have occurred” in D.C. and protecting Arlington from “potential terrorist activity.”

This is where last night’s curfew, requested by the Board and approved by Virginia Gov. Ralph Northam, was decided.

“We felt it was in the safety interests and the best interests of our residents to have a curfew starting at six o’clock,” said de Ferranti. “We thought it was best to air on the side of precaution and safety, given the disturbing images that we saw in Washington and at the Capitol.”

And last night, Arlington was calm.

“I checked with the county manager this morning and last night, there were no incidents at all in Arlington,” says de Ferranti, referencing a lack of activity related to the Capitol chaos. “The curfew was the appropriate step out of an abundance of caution.”

He was aware of at least one hotel in Arlington that hosted group of Trump supporters. The situation was monitored, he says, but he was not aware of any behavior that rose to a level of concern.

Scanner traffic and social media reports also suggest that groups returning from D.C., including individuals flouting mask requirements, were congregating at the malls in Pentagon City and Ballston around the start of the curfew. They quickly dispersed, apparently after getting dinner. ARLnow reporters driving through Arlington’s Metro corridors spotted no large groups congregating outside after the curfew.

“Arlington was safe last night and is safe now,” said de Ferranti. He does not anticipate a curfew in Arlington tonight.

As reported, Arlington County Police did receive and agree to a request from D.C. police to send officers to the District.

“We got a request and we felt that it was in the interest of safety as we were watching, really, what I would describe as rioters, not protesters, but rioters,” de Ferranti says. “Our officers helped the D.C. police department.”

ACPD received a mutual aid request from MPD for today as well, which they are fulfilling.

However, de Ferranti says the intention was to assist D.C. police and not federal government agencies.

“We were very clear that they were going to only operate under an incident commander who was with the D.C. police. We are not at all interested in working with the federal government at this stage because of what we saw in June,” he said, referring to the controversial use of Arlington officers as mutual aid to U.S. Park Police outside the White House this summer.

When asked if ACPD received any mutual aid requests from any federal government agencies yesterday, de Ferranti responded, “no, not to my knowledge.” He noted, however, that the police department did receive a mutual assistance request from U.S. Capitol Police for today, but are unable to provide officers due to already fulfilling the request for MPD.

More than 50 Capitol and D.C. police officers were injured, some seriously, in Wednesday’s violence, the U.S. Capitol Police Chief said in a statement.

The County Board Chair said none of the Arlington officers who were deployed across the river were “seriously injured.” He says one fell “in the course of trying to protect,” but beyond a bit bruised, that officer is “fine.”

Last night Arlington officers in riot gear could be seen alongside Virginia State Police — who were also deployed en masse at the D.C. mayor’s request — protecting the front of the Capitol.

As for inauguration which is less than two weeks, de Ferranti says the county is preparing for it.

“There will be reasons to be concerned and we absolutely need to be vigilant on safety,” says de Ferranti. “But I think we will be prepared and ready for it.”

He says yesterday was a “specific moment” that was “incited by our current president… [where] he sought and helped stir up some anti-Democratic rioters.”

But he’s “cautiously optimistic” that inauguration will be different than yesterday.

“We’re moving forward. We’re having a new president that 80 percent of Arlington has voted for.”

De Ferranti says county officials will evaluate mutual aid requests that come in much the same way they did yesterday by focusing on what is “aligned with Arlington values and ideals.” The goal is to keep people safe, but the county will think twice about granting requests from the federal government, he said.

“We want to do this while not in any way working with, candidly, some of the federal elements of law enforcement that we saw improperly used in June,” said de Ferranti.

De Ferranti said he hopes the inauguration on Jan. 20 will not be marred by anything like the chaos of Wednesday.

“We’ll be having the same standard of: how do we make sure that there is the peaceful, safe transition of power that’s consistent with Arlington’s ideals,” he said.