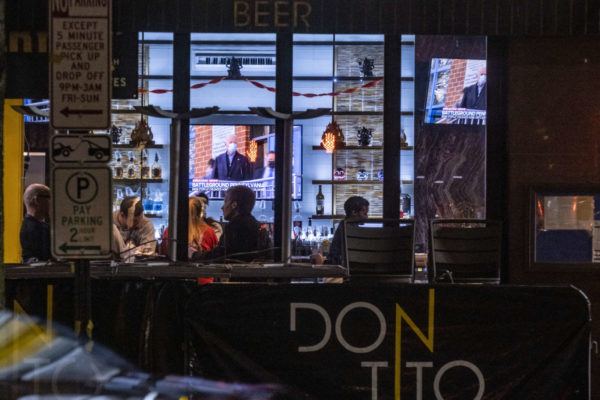 (Updated at 7:30 a.m.) To no one’s surprise, the Arlington electorate has turned out in a big way for the Democratic ticket.

Former Vice President Joe Biden and Sen. Kamala Harris have 80.7% of the vote to 17.1% for President Donald Trump and Vice President Mike Pence in Arlington, with more than 120,000 votes counted and all precincts reporting.

By contrast, 75.8% of Arlington voters picked Hillary Clinton in the 2016 presidential election, to 16.6% for Trump.

The Associated Press called Virginia for Biden just over half an hour after polls closed at 7 p.m.

As of 4:30 p.m. Tuesday, overall turnout in Arlington County was over 75%. The voter turnout in 2016 was 82%, shy of the Arlington record of 85% in the 2012 presidential race between President Barack Obama and current Senator Mitt Romney.

Among local races, Arlington County Board Chair Libby Garvey (D) is cruising to an easy victory, with 71.6% of the vote, compared to 26.6% of the vote for independent challenger Audrey Clement.

In the Arlington School Board race — for two open seats — Democratic endorsees Cristina Diaz-Torres and David Priddy currently have 43.1% and 35.8% of the vote, respectively, leading independent candidate Symone Walker, who has 19.2% of the vote.

All five county bond issues will pass, with between 75-80% of the vote. That’s despite some organized opposition to the school bond.

In the statewide race for U.S. Senate, incumbent Sen. Mark Warner (D) was declared the projected winner by the Associated Press early on.

In Virginia’s 8th Congressional district, which includes Arlington and Alexandria, incumbent Rep. Don Beyer (D) is winning handily, with 75.6% of the vote to 24.2% for Republican Jeff Jordan. The AP called the race at 8:10 p.m.

Thank you to the residents of Alexandria, Arlington, Fairfax, and Falls Church, who have elected me to serve another term in Congress. It is the thrill of my life to represent you every day. Now, let’s get back to work.

The initial returns that included early and mail-in votes were overwhelming Democratic, but with Election Day results rolling in the non-Democratic candidates have added to their totals and cut into the Democrats’ margin of victory.

Around Arlington, the pandemic has most people watching election coverage from their homes, rather than from bars. In Clarendon and Shirlington tonight, only a relative few could be seen in front of TVs inside the neighborhood’s usual watering holes.

As the election returns continue to come in, Arlington County Board member Katie Cristol said tonight that the county is “committed to ensuring every vote is counted.”

Polls have now closed, except for those still in line. Arlington, please know that, however the coming hours (or days, or weeks) play out around the nation, @ArlingtonVotes, the Electoral Board & all of County Government is committed to ensuring every vote is counted. #Vote2020