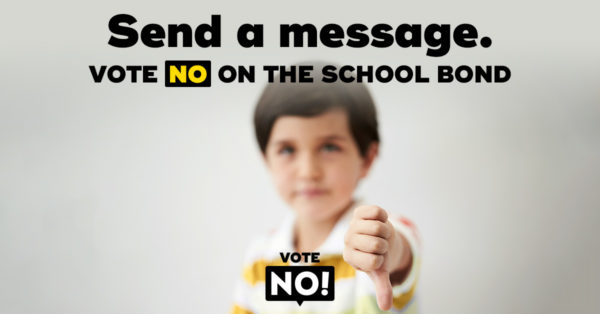 A group of Arlington Public Schools parents has organized to vote ‘no’ on the $52.65 million school bond.

In recent days Vote No Arlington launched a last-minute online campaign against the county’s 2020 public school bond, to voice their frustration with how APS is handling the return to school.

“Right now is a very emotional time,” Vote No Arlington founding member and APS parent Geoff Olinde said. “People feel they are not being served well by APS, and this is one of the few avenues to get APS’s attention.”

The $52.65 million bond will be on the ballot on Nov. 3. According to APS, the bond would fund four major types of capital improvements, which range from increasing space to accommodate projected higher enrollment rates to renovating kitchens.

But Olinde said the middle of an economic downturn is not the right time to take on $52 million of additional debt that will burden taxpayers. Furthermore, enrollment projections went “out the window” due to COVID-19, and many children may stay in private schools, he said.

Olinde — who earlier this week was a guest on the Larry O’Connor show on WMAL radio — said he is far from being a political activist, but the breakdown in education due to COVID-19 motivated him to get involved. He said he has supported previous bonds, and would have supported one that was specifically to support schools reopening.

According to APS, this school bond does focus on the short term as well as longer-term capital needs.

“The 2020 School Bond funds will address immediate needs by providing best-practice security entrances to schools that do not yet have them, expanding kitchens to better serve more students, and upgrading older HVAC systems for healthier school environments,” according to the district.

Alexandra Bocian, who also has supported school bonds in the past, said now is the time to focus on returning kids to school, not brick-and-mortar improvements.

Voting ‘no’ is the only way her voice for reopening schools will be heard, she said. Bocian said teachers and parents who prefer virtual learning have a voice, but parents who want to return are not being heard. She also worries that a ‘yes’ vote would note get her children any closer to returning to school.

“I can talk until I’m blue in the face, but if I hit you in the pocketbook, maybe you’ll listen,” she said.

As a Black working mother of three children, Bocian said she knows what her children can obtain being educated face-to-face, as opposed to online — and said the current solution is not equitable. Instead, it favors wealthy families, who can afford small tutoring groups called “pods,” which can cost up to $2,000, and those where a parent or both parents are home to help their kids.

While countries like France are exempting schools from lockdown orders, APS is just beginning to figure out who returns to school and when, and that is also not equitable, Bocian said.

“How do you think those kids who are going to get to school feel versus those who don’t?” she said. “That causes an issue.”

The school bond is being supported by the Arlington County Democratic Committee. Supporters say the funding is needed to address important school needs.

More information on the planned use of the APS school bond is below.

The $52.65 million will be used for the following projects: