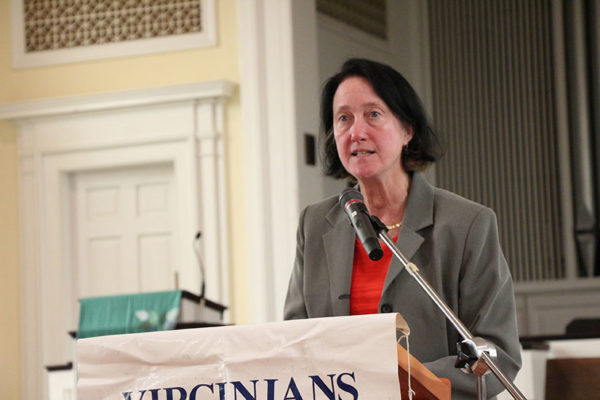 Last week, we invited the two candidates seeking a seat on the Arlington County Board to write a post on why our readers should vote for them in the Nov. 3 general election.

Here is the unedited response from independent candidate Audrey Clement.

I’m Audrey Clement, the Independent candidate for Arlington County Board. As a 16-year Westover resident and long-time civic activist who serves on the Transportation Commission, I’m running because Arlington deserves better.

Now, she is pushing Missing Middle upzoning, which will inflate land values, hike tax assessments, displace existing residents, and build housing unaffordable to anyone earning less than area median income, which is about $126,000 per year.

The County under Ms. Garvey’s leadership has packaged upzoning as the solution to racial inequality despite the fact that few minorities will qualify for mortgages on upzoned lots. In a recent press release Garvey emphasized the Board’s resolve to address “historic and ongoing patterns of discrimination,” implying that homeowners in predominantly white, single family neighborhoods are racist. Yet the County has produced no evidence to support that contention.

Meanwhile the chair and executive director of Alliance for Housing Solutions (AHS), Arlington’s principal advocate for upzoning, own homes in Arlington assessed at over $1 million. Thus they stand to profit from the densification of their neighborhoods. It also appears that newly elected County Board member Takis Karantonis, who serves as vice-chair of AHS, has a serious conflict of interest, which Garvey herself denies.

The County’s COVID response has also been uneven: too little funding to deal with an impending eviction crisis, no guaranteed child care for essential workers, and adoption of a sidewalk ordinance to prevent congregating near bars and restaurants that was unfair to Clarendon business owners and ultimately repealed.

Ms. Garvey has also embraced a plan to change the Arlington logo, which she indicates must go because it depicts the Greek columns of the former Lee mansion at Arlington House.  No matter that Greek columns are ubiquitous throughout the South and that much more pressing issues confront people of color than cultural symbols.

For example, the Black student achievement is wide and growing, with Black high school student pass rates more than 20 percentage points below their White counterparts throughout the County. Focused on symbolic solutions to racial injustice, County officials’ efforts to address the achievement gap have clearly failed.

If elected, I plan to:

Together we can make the “Arlington Way” more than an empty phrase.

END_OF_DOCUMENT_TOKEN_TO_BE_REPLACED

More Stories
Rate of New Coronavirus Cases Reaches Highest Point Since MayLibby Garvey: Why You Should Vote for Me