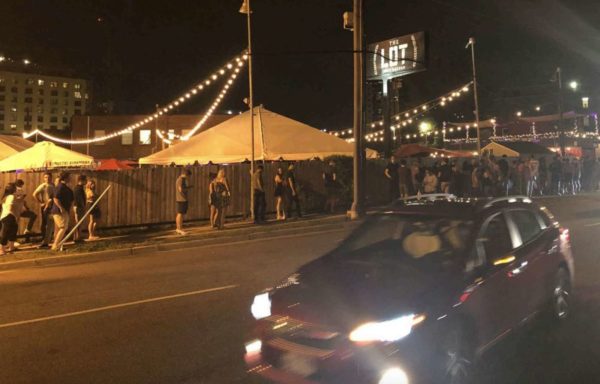 Something exceedingly rare happened during last night’s County Board meeting.

A broad spectrum of Arlington civic life — including progressives, the Chamber of Commerce, business owners, county commissions and a local civic association — all lined up to speak against an ordinance recommended for approval by county staff — one that was temporarily approved by the Board a month and a half ago.

The Board voted 4-1 against extending the sidewalk crowding ordinance, which was approved on July 31 on an emergency basis and will now expire at the end of this month.

The ordinance was passed in a closed County Board session amid growth in coronavirus cases among younger Arlington residents, and outcry against large crowds lined up outside popular Clarendon bars and outdoor venues, as seen in photos posted to social media. It prohibited congregating in a group of more than three in designated zones in Clarendon, making violations a traffic infraction punishable by a fine of up to $100. 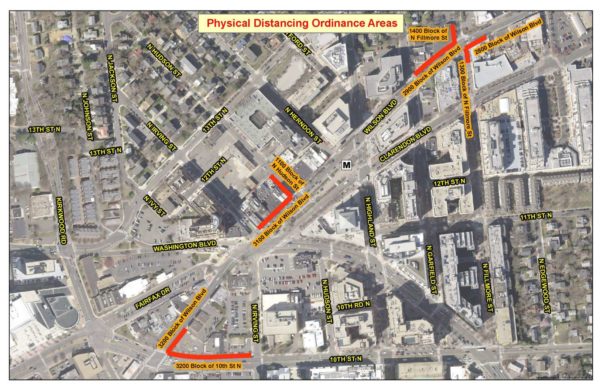 While the county’s health director and other local experts agreed that such crowding presented a risk of virus transmission, it was also not necessarily seen as riskier than other activities that remained perfectly legal — dining inside at a restaurant, driving with a group in a car, etc.

With the rate of new cases now down from the summer peak, the urgency with which the emergency ordinance passed was replaced at last night’s meeting by a more sober assessment of whether enforcement was worth the effort.

A county staff presentation suggested it was.

“Clarendon has seen an influx of patrons 10 p.m.-2 a.m.,” the presentation said. “Efforts to spread out long lines of patrons by officers and restaurant security have been met with defiance, confrontation, and hostility.”

County Manager Mark Schwartz, however, revealed that no fines — “zero… the number between negative one and one,” he said as County Board member Christian Dorsey sought clarification — have been issued so far, despite the posting of signs and an ongoing public education effort.

Community members who spoke before the County Board’s hearing were unanimous in their skepticism of the ordinance.

Gillian Burgess, chair of the Arlington County Bicycle Advisory Committee, started her remarks by listing the names of Sandra Bland, Michael Brown, Eric Garner and others.

“There are but a few of the Black Americans who lost their lives due to minor infractions,” Burgess said. “After a summer of reckoning with America’s and Arlington’s racist past, we must acknowledge the role of over-broad laws and ordinances in allowing police a pretext to stop Black people and people of color.”

She went on to say, as also argued by Arlington Transportation Commission Chair Chris Slatt, that the ordinance prohibits common pedestrian activity, singling out those on foot.

The ordinance “seems to make it an infraction for me to walk down a specified sidewalk with my three young children,” she said. “It almost certainly would be an infraction for the four of us to wait at a bus stop on those sidewalk.”

“I support limiting the spread of COVID and urge the County Board to use every tool in its toolbox to support getting vulnerable children back into schools… this ordinance is not a tool that helps with this problem,” she concluded. “I urge the Board to repeal this.” 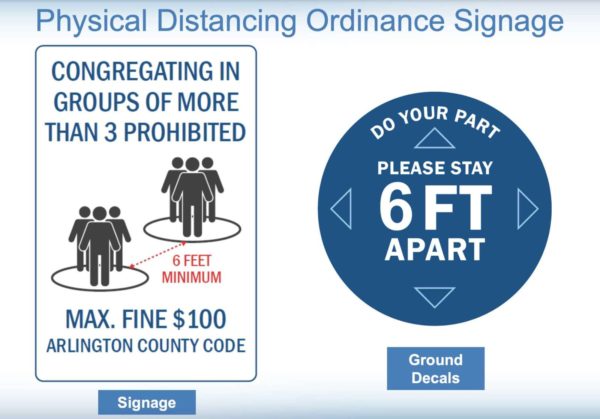 Joining in the criticism were representatives from the Arlington Chamber of Commerce, the Arlington Pedestrian Advisory Committee, and the Clarendon-Courthouse Civic Association, as well as local business owners.

Spider Kelly’s owner Nick Freshman, speaking on behalf of business owners in the Clarendon area, said the ordinance is doing little to stop the spread of the virus while hurting main street businesses that are in danger of closing.

“We are tired, we are stressed, we are worried about our future, and whether we will have one as businesses,” he said. “The impact on our industry has been nothing short of devastating… winter is coming and the patios will be closing.”

The onus of enforcing the ordinance was largely passed off onto restaurant employees who are “already stretched thin,” said Freshman.

“We do not believe the lines outside our restaurants to be a major contributor to the spread of COVID-19, and we believe it is an action that will negatively affect our businesses,” he said. “We are opposed to making this ordinance permanent. We also believe that the ordinance as implemented is ineffective and has not been sufficiently backed by county resources… County staff doesn’t want to do the job.”

The large lines were largely due to capacity restrictions inside popular local venues, and were often outside those with outdoor spaces, which are generally considered to be safer than indoor settings.

Lines, Freshman pointed out, are not an indicator that a restaurant was turning a profit.

“We do not have lines outside our establishments because we’re making money,” he said. “We’re all struggling, we have not been able to return to full employment, and we’re very worried about the winter. Any more restrictions on our operations could result in permanent closures.”

Before joining three other colleagues in voting against the sidewalk ordinance, Dorsey said that the vote was not a slam dunk, as COVID-19 continues to spread in the community.

Dorsey rejected the notion that the ordinance would lead to hostile encounters with police, saying “that hasn’t happened,” but concluded that the restrictions were not achieving their goals. Earlier in the meeting, county health director Dr. Reuben Varghese was unable to demonstrate definitively whether the ordinance was helping to stop the spread of the virus.

“It hasn’t worked. That’s really the bottom line,” Dorsey said of the ordinance. “It’s not an indictment of anyone, it is what it is.”

“I don’t feel like I need to make myself feel good for having done something,” he continued. “We need to be effective in stopping the spread of the virus… We have to go back to the drawing board at the very least, we shouldn’t double down on something that doesn’t work.”

County Board Chair Libby Garvey was the lone yes during the vote, which was taken just before 11 p.m.