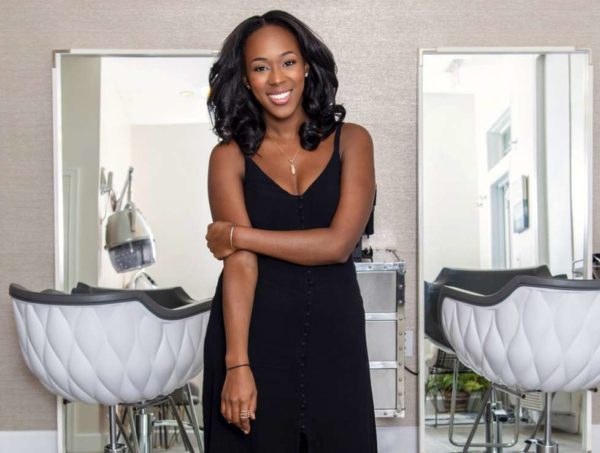 It was President Joe Biden and Vice President Kamala Harris’s day, but for many, it was former First Lady Michelle Obama who stole the spotlight at the Inauguration.

Wearing all burgundy and plum ensemble in an outfit by LA-based designer Sergio Hudson, her bouncy curls matched the day’s mood. Quickly after Obama’s grand entrance, it was revealed by NBC 4’s Jummy Olabanji that the hair stylist behind her look was Arlington’s Yene Damtew.

Damatew was one of a number of Black entrepreneurs, along with Hudson and Christy Rilling who designed the couple’s masks, that Obama has continuously sought to highlight.

Thank you all for the love this morning. It's an honor to be on Mrs. Obama's team. #HairByYeneDamtew pic.twitter.com/KmqKVJ6Q3d

But Damtew has worked with the former First Lady for more than a decade, having also styled her hair during her time in the White House and for best-selling 2018 memoir, “Becoming.”

ARLnow asked Damtew via email about how she became the former First Lady’s go-to hairstylist, what it was like on that special day, and what business been like since word got out.

The interview was edited for clarity and brevity.

What’s the story behind styling Mrs. Obama’s hair for this inauguration?

I have had a relationship with the Obamas since 2009. I was working for her then-stylist, Johnny Wright, and he brought me to the White House where I assisted with hair needs for the entire family.

Working in the White House for eight years was one of the highest honors of my life.

My relationship with Mrs. Obama has remained strong in her post-First Lady life. I’ve been blessed to stay on her style team along with my friends Carl Ray (makeup) and Meredith Koop (clothing). I did hair for her best-selling book “Becoming” and accompanied her on her two-year book tour across the world.

I consider her not just a client, but a friend and mentor.

What did you want to accomplish with her look?

I do always keep in mind that America LOVES Mrs. Obama and she always makes headlines based on what she’s wearing and how her hair looks.

Today was a day about celebrating their good friends, the Bidens, and the first Black woman Vice President. I wanted her look to match the moment! Volume and curls seemed like the way to go and I’m glad so many people loved it.

How long did it take to style?

I don’t talk specifics about any client, out of respect, but I’ve been doing hair long enough that I’m able to be very efficient!

I think I spent more time in the car navigating D.C. traffic and road shutdowns!

There were days in the White House and on the book tour where I would have to make changes very quickly. Once my client and I talk about what kind of look we want to create, it doesn’t take long.

Like with anything else the things that take the longest are sitting under the dryer with color treatments.

While it’s only been a few hours since the world found out, how has business been since? Is your salon being inundated with calls and appointments right now?

It’s been overwhelming — in a good way!

Our website has been inundated with requests for appointments. We do everything via email, so our inbox is very full. We hope to get back to everyone by the end of the week. I

In only a few years, I’ve grown my salon from one building to two and have added several more stylists on staff.

Whether a client meets with me or one of my other stylists we want them to walk out of our doors feeling like they have the confidence they need to take on the day.

The Arlington community has been so wonderful and supportive to my salon. I graduated from Marymount University in Arlington and live in Arlington.

It was only right to have my business in Arlington, too.