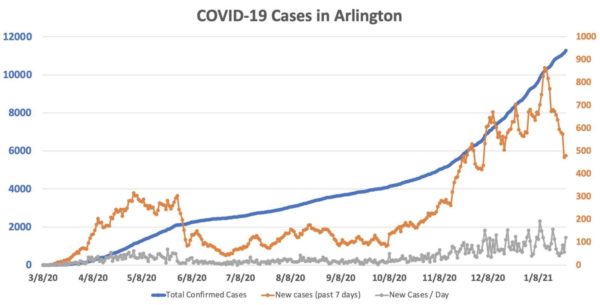 The good news is that coronavirus cases are on a downswing in Arlington.

On Sunday, the seven-day trailing average of new daily cases in the county hit 67.4, the lowest point since Dec. 5. It rose slightly today, as 120 new local cases were reported by the Virginia Dept. of Health.

The drop in cases is being matched by a drop in the county’s test positivity rate, which is now 8.2%, down from 11.9% earlier this month. That was echoed by Virginia Hospital Center ER chief Mike Silverman, in his weekly public Facebook post.

There are concerns, however, that new coronavirus strains may make vaccinations less effective while spreading faster than the current dominant strain in the U.S., leading to a resurgence in cases.

Additional vaccine doses continue to be administered locally, meanwhile, despite a reported lack of vaccine supply.

VDH today reported 1,073 new doses being administered, bringing the seven-day average just above 600 doses per day. A total of 9,994 doses have been administered in Arlington to day, while 847 people have been fully vaccinated with two doses, according to VDH.

On Friday, Arlington County announced that it was working to reschedule thousands of vaccination appointments — many for older Arlington residents — cancelled by Virginia Hospital Center after VDH announced that vaccine doses would only be distributed to local health districts, not hospitals.

“Arlington County is ready to deliver vaccine as supplies become available from the Virginia Department of Health (VDH) and will be diligently working to contact affected Arlingtonians in the coming weeks,” Arlington County Board Chair Matt de Ferranti said in a statement. “We also understand the community’s frustration and appreciate everyone’s patience. We thank our community partners like Virginia Hospital Center and know how critical this vaccine is for the safety and security of our residents.”

The Friday night announcement, and the chaotic rollout of the state and local vaccination effort, has prompted a flood of criticism on social media, in emails to ARLnow, and elsewhere.

“You know that when a government entity puts out a press release in the 8 p.m. hour on a Friday night it’s either bad news, news the government doesn’t want to answer questions about until Monday morning, or a combination of the two,” wrote Sun Gazette editor Scott McCaffrey on his blog this morning. “To its credit, the Arlington government was answering pesky questions from the media.”

“It seems like the blame needs to go to Richmond, which has, by any independent measure, had a tough go of it in getting its act together from the very start of virus-time, nearly a year ago,” McCaffrey added.

Others who contacted ARLnow were less charitable about the county’s responsibility, using words like “shameful” and “mishandled” in criticizing the planning of the local vaccination effort. Others, mostly those 75 years of age or older who fought for a now-cancelled VHC vaccination slot, were upset at online rumors of people who were not in the current vaccination priority group receiving vaccine doses nonetheless.

The county says it will work to prioritize essential workers, including emergency responders and teachers, before vaccinating older residents.

“Arlington County residents who receive cancellation notices from VHC will be contacted directly by Arlington County to reschedule as vaccine supply becomes available in the coming weeks,” the press release said. “The County is currently vaccinating Phase 1a healthcare workers and initial Phase 1b essential worker groups – law enforcement, fire, and hazmat; corrections and shelter workers; and childcare and preK-12 teachers and staff.”

“Arlington County asks for the community’s patience as it works to incorporate the 75+ group to its plans within the existing vaccine supplies,” the press release continued. “Additional Phase 1b eligible groups will be invited for vaccination appointments as Arlington County receives additional supply from Virginia.”

END_OF_DOCUMENT_TOKEN_TO_BE_REPLACED

More Stories
JUST IN: WeWork in Crystal City to CloseLarry King Rose to National Prominence While Living and Working in Arlington