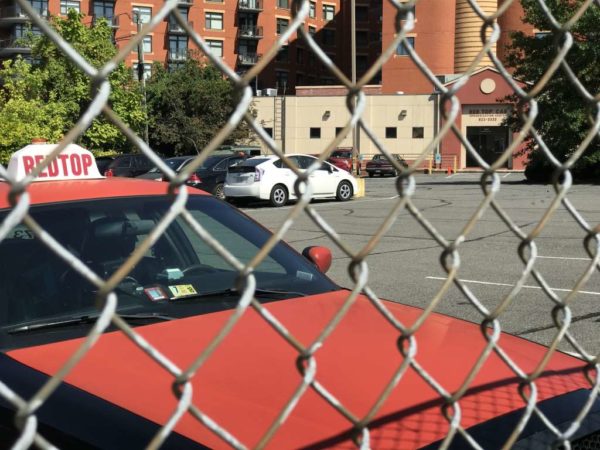 Update at 9:40 a.m. on 2/22/21 — At the public Feb 20 County Board meeting, the board officially codified the motion to provide relief for Arlington taxi companies. It was part of the consent agenda, meaning it’s non-controversial and passed with a single vote.

Original – The County Board is providing relief to struggling Arlington taxi companies.

At Tuesday’s meeting, the Board passed a motion to waive 2021 certificate fees for up to 50 cabs per company, as well as for all wheelchair accessible taxicab vehicles. For those companies that have more than 50 cabs, a reduced annual fee of $50 per cab, down from $150, will apply.

Arlington’s taxicab ordinance requires an annual renewal certificate of public convenience and necessity for each cab on the road. That fee typically is $150 to be paid by February 1.

The County Board’s motion is different from the one County Manager Mark Schwartz initially proposed in the staff report. That proposal called for all certificate fees to be cut from $150 to $50 and be waived only wheelchair accessible vehicles.

The Board felt that this motion did not go far enough in helping an industry that’s been devastated in recent years not just by the pandemic, but also by the rise of ride hailing companies like Uber and Lyft.

In Arlington, six cab companies are currently in operation: Hess, Arlington Yellow, Crown, Friendly, Blue Top, and Red Top — the latter of which is the largest.

Many of these companies have been in operation for decades, still owned and operated by the same families.

“It is devastating to see what’s happening to the taxi industry,” County Board Member Christian Dorsey said at the meeting. “It’s like switchboard operators of the past. It’s an industry that’s being driven into obsolescence. And COVID has hastened that decline.”

The call for help came from the companies themselves, in the form of letters and public comments at the meeting, in which speakers asked for a reduction or waiving of the fees.

John Massoud was one of those who sent a letter. He’s vice-president of Blue Top Cabs, a company he and his father founded in 1984. Massoud tells ARLnow that while Blue Top took a hit when Uber and Lyft became popular, they were doing okay.

“We were adapting. It was difficult, but we were getting it done,” says Massoud. “But then the virus hit.”

The company lost nearly a million dollars in revenue since the pandemic, he says, mostly due to the closing of Arlington Public Schools — transporting students is a huge part of their business.

“We are one of the only two companies in Arlington to have wheelchair vans,” says Massoud. “Our business model has always been focused on serving Arlington residents and the special needs community.”

He requested a two year waiver of the fee and believes the steps taken by the Board are “in the right direction,” but it still leaves him in tough spot.

“We have 119 certificates and most drivers aren’t working, so we are paying for something we can’t use,” Massoud said.

Ninety-year-old Hartman Reed of Crown Cabs is the owner of one of the two Black-owned cab businesses in Arlington, which historically provided rides to those in the Green Valley and Halls Hill communities when other cabs would not.

He explained at the meeting that in the nearly five decades he’s been in business, 2020 was the hardest.

“I’ve been in this business for 47 years — 46 of those years have been wonderful, but this year has been devastating,” he said.

Since April, the company has only made $800 in revenue and a number of drivers have given up their certificates.

Darryl Collins, owner of Friendly Cabs, also spoke, noting that his grandfather started the company in 1948 because of segregation.

“African-Americans couldn’t be born in Arlington, Virginia, so we had to transport [pregnant mothers] to Howard University Hospital [in D.C.],” he said.

He, too, said they’re struggling immensely, losing thousands of dollars every month.

The County Manager’s proposal would have cost the county about $50,000 in revenue in comparison to 2020. That loss of revenue will be higher given the motion that the County Board did pass, though the exact figures have yet to be reported.

Four out of the six cab companies in Arlington have fewer than 50 vehicles, meaning that they will not pay any certification fees for the upcoming year.

Red Top and Blue Top both operate more than 150 cabs, meaning they’ll pay the $50 fee on a large portion of their fleet. However, those companies are the only ones that operate wheelchair accessible vehicles and will not have to pay any fees on those.

All of this helps, says Massoud, but he says he’s lost 90% to 95% of his business. This has left him fearful that the family taxi business may not last.

“I’m not an optimist or a pessimist. I’m a realist,” he says. “I don’t know what’s going to happen.”