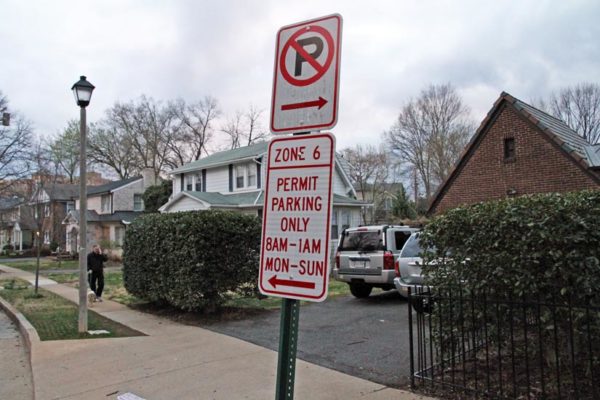 Proposed changes to Arlington’s Residential Permit Parking program, including a pay-to-park option for short-term visitors, will go before the County Board next week — with a caveat.

On Monday members of the Planning Commission hammered out the kinds of changes to the program that they want the County Board to consider. The matter is set to be taken up during the Board’s meeting on Saturday, Feb. 20.

The commission recommended a case-by-case approach to paid, short-term parking in neighborhoods — currently not an option in places where parking is restricted to residents and their guests only during certain hours —  as members were divided on whether to include it at all. Some support it across all neighborhoods with RPP programs and others support the possibility of neighborhoods requesting it. A few oppose it full-stop.

“I can’t do this to my neighbors,” said Commissioner Denyse “Nia” Bagley, who opposes pay-to-park entirely.

Vice-Chair Daniel Weir said the two-hour parking meets “a whole host of needs” and unanticipated circumstances that “all fall under managing parking,” from when people go to nearby restaurants or visit friends. Short-term visitors would be able to legally park without a pass or permit and payments would be processed through the ParkMobile app or through the EasyPark device.

The RPP program was originally created as a response to commuters parking in residential neighborhoods near Arlington’s Metro stations and commercial centers. It survived a legal challenge that reached the U.S. Supreme Court in 1977, and later expanded to numerous neighborhoods around the county. Neighborhoods must petition for RPP zones, but in many cases those who live in apartments and condos are excluded from receiving permits, raising equity concerns. 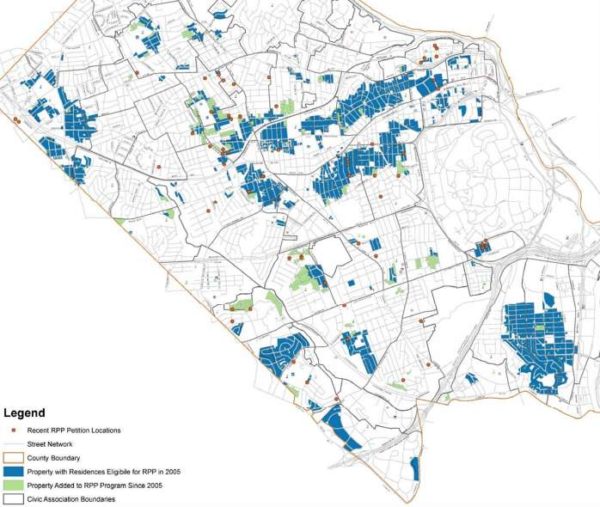 The commission also recommended allotting on-street parking permits to household units based on whether they have off-street parking, such as driveways or garages. Households with off-street options can get up to two permits, one of which could be swapped for a FlexPass, a dashboard placard that can be used by residents or their visitors.

Residents without off-street parking are eligible for up to four on-street permits, one of which could be swapped for a FlexPass.

According to a county staff report presented to the commission, the cap is higher than what was previously proposed, “in response to concerns that unrelated adults (who may have more vehicles than a family household) sharing a home without off-street parking in an RPP zone could face an unnecessary hardship.” Still, it’s lower for those with off-street parking than the current program.

“The current program allows for up to four (4) permits, one (1) FlexPass and three (3) vehicle specific permit decals,” a previous staff report said. “Many households already in the RPP program would not be able to obtain as many permits as they do today Lowering the cap encourages households with multiple vehicles to use their off-street parking, leaving space on the street for others.”

The commission did not tweak the expansion of parking options and permits to employees of K-12 schools and group homes. In response to concerns about enforcing paid parking, commissioners unanimously voted to include language stipulating that parking enforcement should be on par with metered parking elsewhere in the county.

These potential changes come three years after a moratorium was placed on new parking restrictions so a review of the program could be conducted. The review concluded last fall, kicking off a new period of public engagement as the changes wound through county processes.

The changes went before the County Board for the first time in December, when Board members decided to delay a public hearing to give the community more time to digest the changes.

At the time, the County Board approved an amendment allowing residents to buy a third or fourth parking pass at a higher cost, after hearing from families who suddenly had adult children come home due to the pandemic, in addition to homeowners who said the program would force them to widen their driveways.

END_OF_DOCUMENT_TOKEN_TO_BE_REPLACED

More Stories
Peter’s Take: APS Must Refocus on InstructionStylish Trenton Square at Ballston — 3 Sold in the Past Week